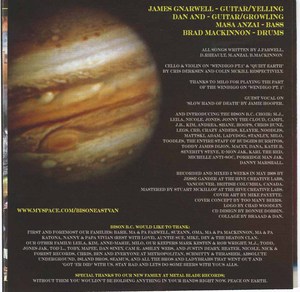 On their second album, "Quiet Earth," they practice a muscular, sludgy, heavier-than-you style. It’s got just enough chug and boogie to get those affectless hipsters off their bar stools, but it’s heavy on the savagery because they're really playing for the road worn mercenaries with wind milling their hair in the front, not to mention the kids next door with pockets full of Magic cards who are suddenly all starting bands tomorrow.

"Quiet Earth" sounds a lot like early Mastodon, but Bison B.C. mix it up with a swaggering, righteous bar band edge. Though they handle their instruments with a prog-rocker's precision, they don't write songs to show it off. As they blast through these sludgy, churning compositions the craft is more than evident, but what's even more up-front is Bison B.C.'s enjoyment.

"Slow Hand Of Death" is a serious standout in that realm, with a series of plodding, massively heavy guitar parts. Eventually it speeds up into an acid-drenched guitar solo out of some 80s-themed nightmare, like Black Sabbath and Diamond Head in a fistfight. "Wendigo Pt. 2" also goes way beyond the call of duty, taking a similar rapid-fire solo and bends it into a galloping thrash rhythm, with some spectacularly shreddy call-and-response melodies along the way. I'm not breathing too heavy over the quiet string intro to "Wendigo Pt. 1," though.
-Zamfir