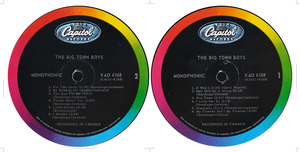 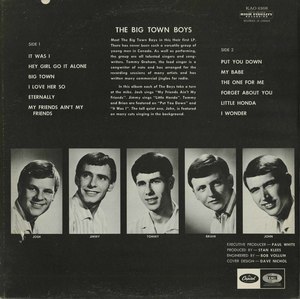 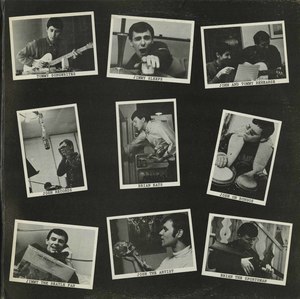 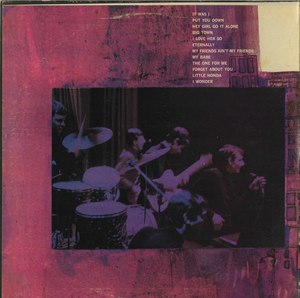 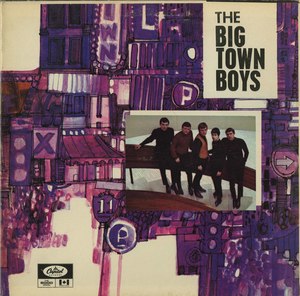 The Boys Come To Town
The Big Town Boys got their start in 1963 when they were put together by Tommy Goodings (who by that time had adopted the stage name Tommy Graham, a name he'd continue to use for the remainder of his career) to back Shirley Matthews on her breakout debut hit "Big Town Boy." They were her backing band for a number of live and TV appearances for a while after that.

John Basset Jr. heard of the band and offered them the prestigious job as the House Band on his After Four TV show, every Sunday at the CFTO studios backing the local talent such as D.C. Thomas, Little Diane, Jack London, Diane Stapley, etc.

Shortly after the band started to make headway, Michael had won a scholarship to study at the Conservatory of Music in Munich, Germany and sadly he left for bigger and better offerings. To give credit where credit is due, Michael Lewis did all the arranging for the band prior to his leaving. The band continued with the loss of its main arranger opening shows for the likes of The Dave Clark Five, The Beach Boys and The Loving Spoonful. They were also the back-up band for Sonny & Cher when they appeared at Toronto's Maple Leaf Gardens and later shared the stage with guitarist Jimmy James (Jimi Hendrix) when he was with Curtis Knight and The Flames, playing at Joel Heller's 8th Wonder in the village in NYC. in January 1966.

An interesting testament to their live reputation and popularity was doing the Easter break at the T. Eatons store where the crowd got out of hand and caused some damage knocking over displays while pursuing the band when they left the stage. Needless to say the contract for the weekend was canceled.

It was shortly after that when Brian Massey took his leave, being replaced with bass player Lou Atkins formally of J.B. and The Playboys from Montreal. Then later when John Henderson left he was replaced with front singer and keyboards Peter Sterbach.

The band really made its mark on the Toronto Sound scene when they recorded an album of their own in 1966 for Capitol Records. Sadly, no tapes exist of this album and all we have left is the LP. Which the value of is steadily rising over the years.

They ultimately abbreviating their name to BTB4, releasing two singles for Yorkville records in 1967. "Do It To Em" was originally written for the opening of Glen "The Big G" Walters show at CKEY. "Do it to em Big G, do it to em." Playing every night with Glen plugging the band. They also had the chance to tour across Canada several times.

By 1968 the group had run its course. Here's a quote from Brian Massey to tie it all together:
"The Big Town Boys weren't the exception where egos take over, there was no collaboration, just dictating and as soon as personal feelings entered, and personnel changes happened, the group faltered and eventually died. That is, except for the occasional reunion with the original players. If I sound of mixed emotions, I have reason to be. Out of the seven original members only two survive, each having a different story, a coin tossed."
Original Write Up/Info: Brian Massey
Final Write Up/Editing: Aaron Lusch
aaronlusch@hotmail.com