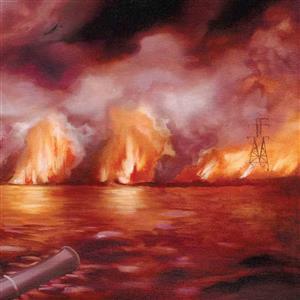 There is a war now. The message has been sent through short wave in code. The Besnard Lakes twisting chronicle, or fever dream, of spies, double agents, novelists and aspiring rock gods has turned violent. Loyalty, dishonor, love, hatred all seen through the eyes of two spies, fighting a war that may not be real. One follows the other as they receive coded messages and spread destruction.The city is burning, and it's to the benefit of music obsessives everywhere. Once again, the husband-and-wife duo of Olga Goreas and Jace Lasek has crafted a majestic, sprawling vision of guitar bombast and captivating pop experiments. With the aid of Besnard members Kevin Laing on drums and Richard White on guitar, The Besnard Lakes Are the Roaring Night is a dense, ambitious recording, experimenting, as always, with the studio as instrument. The Besnard Lakes Are the Roaring Night calls upon the influence of ELO and finer parts of the Alan Parsons Project in its orchestration. Still helped by the Ghost of Beach Boys Past, the album is more Dennis Wilson than Brian, and more Peter Green Fleetwood Mac than Lindsay Buckingham. The album is a dark bliss-out that folds the eerie guitar epics of the Montreal band's breakthrough into a wall of affected drones and atmospherics, but with a toughened immediacy and grit that gives the form a much-needed shove over the cliffs, making for a haunting, provocative swan dive into the crushing tide.

The Besnard Lakes Are the Roaring Night is the third studio album by the Canadian rock band The Besnard Lakes, released in North America on March 9, 2010. The lead single is "Albatross", was released as a 12-inch single on February 9, 2010.

The band describe the album as "psychedelic rock- each song is its own little world, an atmosphere. I’ve always been enamored with these songs that take forever to get going, long songs that build, with a story and a long build to a climax."[1] Thematically, the album continues their lyrical style of combining fictional and true stories. Lasek's songs usually revolve around a retired spy who worked during the war and is now a lousy musician, while Goreas' songs are more inspired by her personal experiences.[1]

The album was tracked and recorded at the band's own studio, Breakglass Studio, using a 1968 Neve germanium mixing console rumored to have been used to record portions of Led Zeppelin's Physical Graffiti, and introduces some new instrumentation for the band: 12 string guitar, flute, omnichord and mellotron.