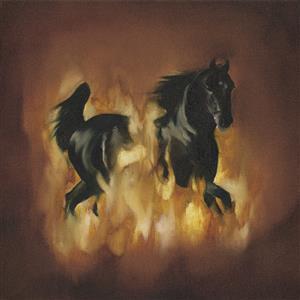 Rich with Beach Boys style harmonies, Roy Orbison reverbs and orchestra, Pink Floyd's pacing and Freddy Mercury's falsetto, The Besnard Lakes Are The Dark Horse is a luxurious foray into sound and music. This is the second record by The Besnard Lakes, Montrealers by way of Western Canada. Their independently released previous record, Volume I, came out in 2004, and it was noticed by critics but was largely overlooked by the public at large. On both records, The Besnard Lakes have shown that they are masters of finely-honed experimental pop songs that invoke the eerie Lynchian setting as aided and abetted by the music of Julee Cruise. But, on The Besnard Lakes Are The Dark Horse, the band throws into the mix a mad dash of Fleetwood Mac proportioned swagger and ambition. Not so incidentally, the Besnard Lakes have created a masterpiece that will resonate within all quarters, amongst critics, casual and not-so-casual rock listeners, garden variety pop fans and headphone junkies.

One of my favorite albums of all time, The Besnard Lakes are... is, I believe, the modern day Dark Side Of The Moon. It's an album that requires time, but when given, its eight tracks reward endlessly. This album got it all so right. It's got orchestration, synths, shoegaze, ambiance, pop, explosive guitar solos, experimentation - everything you could want...except for a hit single. It's just too grandiose, too big and ambient - but sit back and blast "Devastation" and it will devastate your eardrums with awesomeness; and who the fuck else writes music as gentle, haunting and unpredictable as songs like "Because Tonight" or "For Agent 13". Nobody. That's who. And it's got "And You Lied To Me", which is just an orgasmic slow-burner. The Besnard Lakes are... is so tight and diverse that it just feels like a classic album.