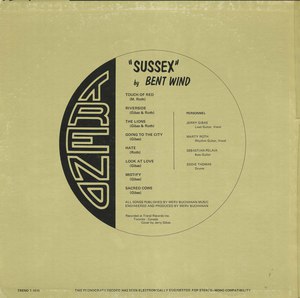 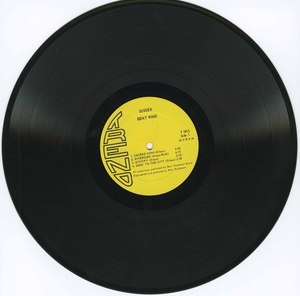 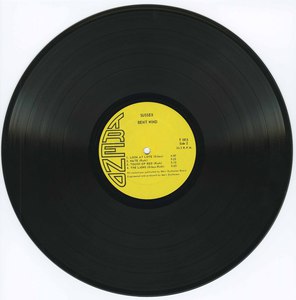 Phenomenally rare, with those surviving near mint copies fetching upwards of 5000 bucks a pop, the 1969 acid rock raver Sussex had its origins in a drug-addled house in Toronto's Annex neighbourhood. As guitarist Marty Roth "recalls" on his blog, "Myself and another friend from schooldays were running a boutique/headshop at the corner of Sussex and Robert. And, every so often...I'd hear a faint blur of something, close to what some might consider music. It was emanating from the basement of one of the houses beside the lane at 57 Sussex Avenue, almost a block away. As it turned out, the guitarist was Gerry Gibas, a close friend who I'd been jamming with while writing original tunes any chance we could. He dropped by the shop during their break and told me to drop over. That's where I met Eddie Thomas Majchrowski, the drummer. His mother owned the house at 57 Sussex Avenue and all the rooms on all three floors were rented out to a mix of students, freaks, druggies and musicians. To my surprise, the bass player was Sebastian Pelaia, a classmate from high school, two years earlier."

With the nucleus of Bent Wind now in place, the lads consumed copious amounts of acid, hawked psychedelic candles at the infamous hippie residence Rochdale College, gigged around the corner at several U of T frat parties, and somehow managed to record these eight stoner nuggets. Roth: "Until we finally made it to recording an LP, all of our songs were without real words. We would use a sort of skat gibberish that sounded similar to words but were muffled by the way we used the microphone and echo effects. Nobody cared." With the rock world in flux - Led Zeppelin had already played sold-out shows at the Rockpile venue in February and August of 1969 - the plodding, freeform guitar workouts and soaring harmonies on Sussex would have been standard-issue cool at the time, bridging the Woodstock nation with the brave new heavy-metal world to come. But the band was essentially broke (Roth: "You have to remember, we were "hippies". We didn't have or need any money."), so it is little wonder that even the well-crafted songs sound somewhat amateurish. The heavier tracks like 'Mystify', 'Riverside' and 'Hate' come off better here, cutting through with muscular chords and airy vocals, whereas the flowery ballad 'Look at Love', though well-intended, seems to lug its psychedelic baggage a little too awkwardly. Still, in a Toronto awash in hippies and draft-dodgers, with a little spit and polish - not to mention some financial backing - Sussex could have been a contender.

And what's perhaps even more remarkable, Roth reformed Bent Wind some two decades later, independently releasing a follow-up LP, the cryptically titled The Fourth Line is..."You Will" (Trend) in 1989, as well as Shadows on the Wall (Psychedrome) in 1996.