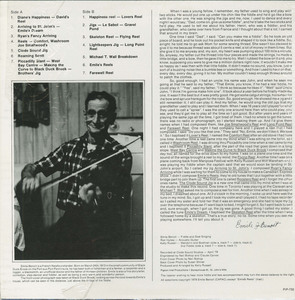 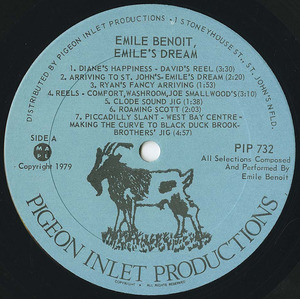 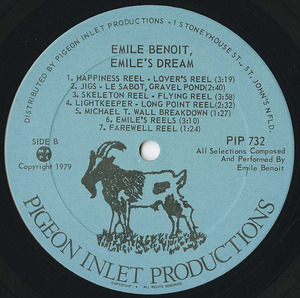 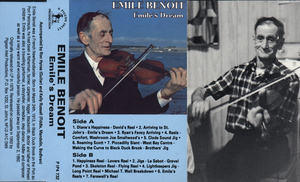 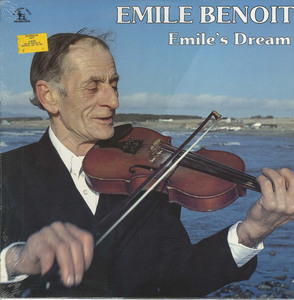 Emile Benoit was, perhaps, Newfoundland's best known fiddle player whose unique combination of distinctive style and uncommon gift for composition made him one of the best traditional musicians of his time. Emile Benoit was born, raised and died in Black Brook, on the Port-Au-Port peninsula on the West Coast of Newfoundland. The area has been populated by Bretons and Acadians from the 1820's on and is still mainly French speaking. The surrounding area is strongly colored by Scottish tradition, the influence of which is to produce a curious and fascinating mix in Emile's essentially French music. Emile Benoit has been a myriad of people in his lifetime, among them father to thirteen children, fisherman, farmer, carpenter, healer, dentist, part-time veterinarian, blacksmith, storyteller raconteur, musician and composer. He began fiddle playing at the age of nine and throughout the years his composition and skill saw him develop into an eclectic and impressive musician. Benoit was particularly fascinating performer who loved nothing better than to entertain an audience; clowning around, waltzing with his fiddle, lying on his back while playing and dancing and singing at the top of his lungs. His "joie de vivre" was infectious and he was dearly loved by all that knew him. Late in life Emile Benoit began his recording career. He made three albums, including "Vive la Rose", his last, in 1992. Emile recording brought him to numerous folk festivals both in Newfoundland and across Canada, the US and Europe. He has been the subject of numerous scholarly books and articles and has been featured extensively on radio (both in French and English). Emile held an honorary Doctorate at Memorial University and in May 1992, the Newfoundland Arts Council conferred its prestigious Lifetime Achievement award upon Emile, in recognition of his full and rich career.

Emile Benoit died in September 1992; just days after he cracked the wrapper on his last CD, "Vive la Rose". Emile's influence was as wide and diverse as his skill and performance, and can be heard whenever traditional Newfoundland music is played.

The listener wishing to hear more fiddle and less accompaniment may turn the stereo balance to the right.