Barlow, Emilie-Claire - The Very Thought of You 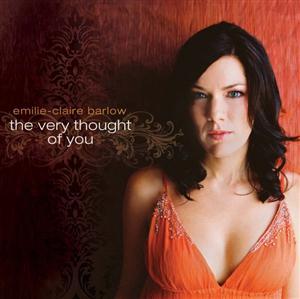 The Very Thought of You

Emilie-Claire Barlow - Canada's incomparable vocal-jazz jewel - is dazzling the world! Her energetic live performances and exquisite recordings thrill sold-out audiences from Tokyo to Montreal! Emilie-Claire leads her stellar band through innovative arrangements of American-Songbook treasures, rhythmic bossa novas and elegant ballads. Emilie-Claire continues to endear herself to critics, peers and audiences everywhere with her relaxed, polished demeanour, her charming humour, and A VOICE OF UNFORGETTABLE BEAUTY!

The stunning new release, The Very Thought Of You may be Emilie-Claire's most personal album to date. There is an up-close and intimate tone that starts with the gorgeous cover art, and continues throughout this entire recording. The arrangements are fresh and focused, and all her own. Joined by an all-star band (Reg Schwager, Nancy Walker, Kieran Overs, Mark Kelso) and some fabulous guest soloists (Kelly Jefferson, Kevin Turcotte, Bill McBirnie, Alan Hetherington) Emilie-Claire leads the group, including a large string ensemble, through gems from the American Songbook (Almost Like being In Love, What A Little Moonlight Can Do, Surrey With The Fringe on Top), beautiful bossa novas (So Many Stars, De Conversa Em Conversa), and even a few tunes en francais! (C'est Si Bon, Les Yeux Ouverts). This album is romantic, playful, lush, swinging...timeless.

She's been called "the next big thing in jazz" (CBC - Canada Now), but Emilie-Claire is no newcomer to the music business. She started her career as a singer and voice actor at the age of seven, lending her voice to various television and radio jingles and voice-overs.

Her 2006 release, the self produced and arranged, Winter Wonderland elevated emilie-claire's profile on both a national and international level. With a stack of rave reviews, a spot in the TOP 10 holiday albums on iTunes, and a circuit of National Television appearances to promote W.W. under her belt (Etalk, Canada AM, Gill Deacon)- Barlow has kicked her career into high gear.

Her 2005 release "Like A Lover". (June 2005) garnered critical acclaim and helped to secure Barlow distribution distribution in Canada (Fusion III) and Japan (JVC), where Like A Lover continues to sit in the Top 30 Jazz albums on HMV Japan, since its release in September of '06.

Emilie-Claire spent 5 years at Etobicoke School of the Arts studying music theatre and dance, then continued her studies at Humber College, focusing on music theory and arranging. During this time Emilie-Claire put together a jazz quartet and began performing in and around Toronto.

In the fall of 1998, Emilie-Claire released her first CD: Emilie-Claire Barlow - SINGS. Over the next five years, in between recording 'TRIBUTE' and 'happy feet', Emilie-Claire played consistently to sold out shows at top jazz clubs and festivals. People are charmed by her energetic, confident performances, her natural demeanor and wit. Whether it's with a small jazz trio, or the power-house octet, Emilie-Claire continues to endear herself to audiences everywhere.

"It's very, very good. The best vocal jazz disc in a long time." says Geoff Chapman (Toronto Star) of Emilie-Claire Barlow's third album 'happy feet' (2003). The album is a follow up to the Juno Award nominated 'TRIBUTE'. (2001 - nominated for Vocal Jazz Album of the Year)

As a busy studio singer and voice actor, Emilie-Claire can be heard on numerous commercials (Tim Horton's, The Bay) and recordings, and is a featured voice on several animated television series such as Rescue Heroes, Martin Mystery, 6Teen, Spider Riders, Total Drama Island.

"Her clarity and, more important, her accuracy set her apart from the many other singers around town." - Mark Miller - Globe and Mail "Barlow sings with winning verve, cheering articulation and a daring that's all too rare." - The Jazz Report