Barber, Jill - For All Time 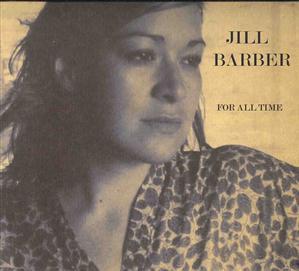 For All Time is Halifax-based Jill Barber’s second album, and comes two years after the CBC-produced EP Oh Heart (bits of which can be heard here). For this full length, Barber is accompanied by a variety of Canadian musical heavyweights and emerging artists. Blue Rodeo bassist Bazil Donovan features on most of the tracks, and Jim Cuddy lends backing vocals on “Don’t Go Easy.” Toronto's Luke Doucet lends a hand, Sarah Harmer’s bandmate Spencer Evans appears on clarinet and piano, and Barber’s brother Matthew (whose own Sweet Nothing was released just last year) throws in a few harmonies.

For all of the back-up help she receives, Barber’s producer Les Cooper is wise to keep most of the focus on her voice, allowing the lyrics to be front and centre. The album kicks off with the languid “Just For Now,” a meditation on all the good that will be done someday, some other time. “Legacy” is a forthright tribute to a musical mentor, and features some beautiful guitar work by Stew Crookes and Luke Doucet. On the gorgeous “Don’t Go Easy,” Barber shows her ability at singing country and keeps pace with seasoned lead Jim Cuddy. “Hard Line,” the album’s highlight, is folky and upbeat; more than any other song here, Barber sounds like she's having fun.

It took me a few listens of Oh Heart to be convinced that Jill Barber was a stand-apart artist in a Canadian folk/pop scene already populated by Sarah Harmer and Sarah Slean, also obvious influences of hers. Where Barber shines, though, is in her sincerity. Her voice, at once playful and evocative, has the ability to steamroll through a cabaret number such as “When I’m Making Love To You” and bring you to your knees on the reflective “Ashes To Ashes.”

It's hard to not like and root for an artist like Jill Barber. She writes carefully crafted, insightful folk songs, keeps the production tasteful and understated, and can sing. If merit has anything to do with success, For All Time should bring her the recognition she deserves.
-Kate Steel