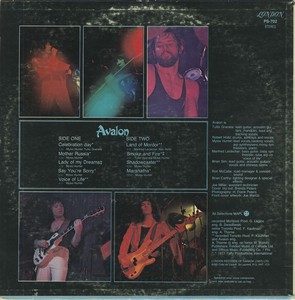 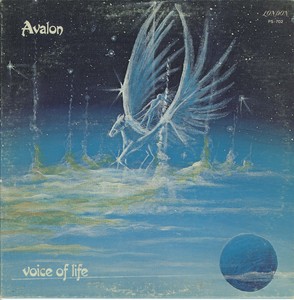 Hunter and Leidecker were forming a new band in Ottawa in the mid-70s and approached Deeks in the spring of 1976 while he was working at a gas station trying to make ends meet. Deeks suggested adding drummer Holtz. They were now a four piece but needed another guitarist to share lead and rhythm duty so, after many auditions, John Fenton was added. Avalon was christened and for the first year played gigs in Ottawa and throughout Southern Ontario.

Deeks and Fenton left and were replaced by Granata and Sim as this spiritually based new-age progressive act began recording their debut album for London Records.

Hunter would go on to a successful career with Michael Fury, Refugee and as a solo artist. He gave up his music career in the 1990's and is now a minister; Fenton would become a crucial member of punk band The Action and later the Fenton Brothers Band; Deeks joined Octavian and later Exit 18 following his stint with Avalon. He has done session work and helped develop other artists in his home digital studio. Deeks also taught 'Digital Recording/Production' courses at Algonquin College, Ottawa from 2002-2006. He is currently working on his first solo CD expected in October 2007; Sim went on to found Crucial Moments fronted by avant garde vocalist Cyndela Whitney and featuring Brian Radding of Five Man Electrical Band on bass. Sim became one of the most respected and creative guitar players in the Ottawa area performing with his own band and with many others for hire. In 1989 he won the Ottawa area Guitar Warz. In the past 6 years Sim has been exploring percussion; In 1983, Leidecker opened up his first studio in Aylmer, Québec working with a large number of area musicians such as Eight Seconds, Charlie Major and Kyana. In 1988 he designed and built a 3000 sq. ft. studio in Nepean (now Distortion Studios) and worked with many artists (Love Chain, Antix, Soul Tattoo) until deciding to focus on production. In 1991, Leidecker signed Ottawa thrash metal act Exciter and produced the CD 'Kill After Kill'. He then signed Exciter to Noise Records (Germany), a European tour followed and sales reached in excess of 100,000 units.

Around this time Sim and Leidecker started LS Productions and in 1993 'Better Live Than Dead', another Exciter release, was unveiled. LS Productions has also written and produced for Natasha Crowne (with producer Michael Quatro) and upcoming female vocalist Nykala.