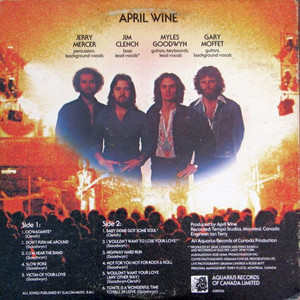 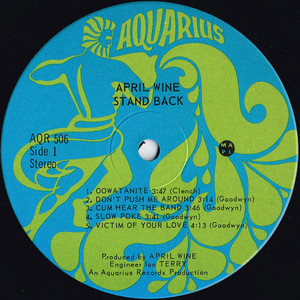 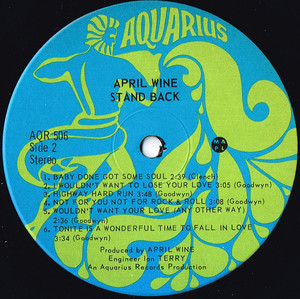 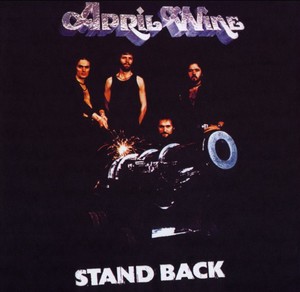 Stand Back elevated April Wine from gold to multi-platinum status in Canada.

Some regard this as the first truly great April Wine album. It contains the standard opening concert song Oowatanite with the ringing fire bell and rotating red lights.

After a string of inconsistent albums dotted with promising tracks, April Wine got it together in the album format on 1975's Stand Back. This album found the group hitting a workable balance between pop songcraft and hard rock guitar power and effectively distilling it into a series of tight songs that rock out as they deliver pop hooks a-plenty. It starts on an up note thanks to "Oowatanite," an effectively arranged rocker featuring a fire-alarm sound effect. It became a hit in the band's native Canada and quickly became a permanent fixture in the band's live set list. Other potent tracks on Stand Back include "Cum Hear the Band," a languid but guitar-laden track about the joys of seeing a band live with an effective sing-along hook in its chorus, and "Victim of Love," a steamy rocker that puts forth its tale of unrequited love with plenty of scorching guitar work. Stand Back also played up Myles Goodwyn's penchant for the power ballad on "I Wouldn't Want to Lose Your Love" and "Tonite Is a Wonderful Time to Fall in Love," two memorable songs that effectively underscored their delicate ballad melodies with layers of restrained but powerful electric guitar. This effective combination of slickness and muscle made the songs big hits at home and paved the way for later international hits like "Just Between You and Me." Elsewhere, the band experiments with blending other genres into their pop/rock sound with mixed results: "Slow Poke" is a lascivious novelty tune that runs on a little too long for its own good and the funk-rock attempt "Baby Done Got Some Soul" is as awkward as its title suggests. Despite these occasional lapses, Stand Back remains a solid and likable album that frequently tosses out unexpected surprises (the lovely Beach Boys-style vocal harmony breaks that suddenly pop up in the otherwise hard-rocking "Highway Hard Run"). All in all, Stand Back is one of April Wine's finest achievements in album form and a sure bet for anyone who enjoys 1970s arena rock at its sharpest.