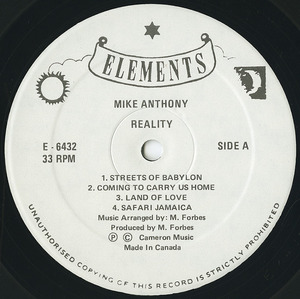 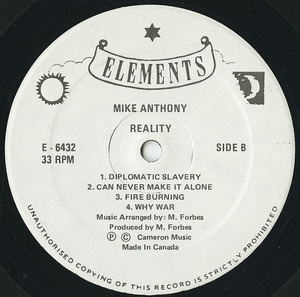 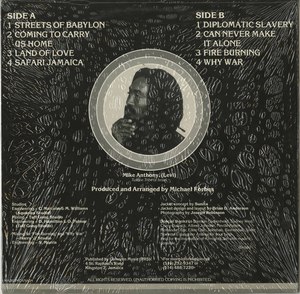 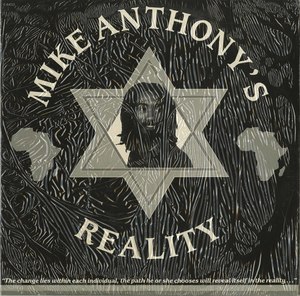 Jah Mike Anthony AKA Michael Forbes was born in Kingston, Jamaica in 1952. He grew up among some of Reggae's great legends having lived at 139 Orange street, a place we called Big Yard in those times. Not far from there was Beverley's Studio at the corner of Orange and North streets where some top artists such as Jimmy Cliff, Desmond Dekker and the Aces, The Melodians and even the Great Bob Marley often recorded.

A cousin of Toots Hibbert of the Maytals (one of Reggae's musical giants), Jah Mike does not let that go to his head. So, while soaking up the good R&B, Soul, Ska and Rocksteady, Jah Mike had learned different formats in the music.

Jah Mike played the sound system with his friend Prince Patrick. Competing among other sounds such as Tipper Tone, King Tubby's and Sir George, he met great DJ's such as U.Roy, I.Roy, Big Youth etc. Prince Patrick left Jamaica for Canada, so Jah Mike decided to pursue a career as a performer-artist.

His first recording was with the late Bim Sherman, recorded at the legendary Channel One Studio, a single entitled "Love Forever", backed by Chinna Smith and the Soul Syndicate Band.

In the early seventies, Jah Mike and Albert Johnson teamed up and started singing and writing together, compiling material for a new album.

Jah Mike's first single as a singer-songwriter was produced by Lee Scratch Perry at the Black Ark Studio. A song called "Land of Love" with Brethren Albert Johnson. The song received substantial air play in Jamaica and crossed borders to radio stations in Holland and France.

During the seventies Jah Mike toured with some of Jamaica's top artists including Delroy Wilson, Ras Karby, Eddie Fitzroy and the late Joe Higgs.

Jah Mike moved to Canada in 1984 and released his debut album - "Mike Anthony's Reality" a few years later. He toured the Québec and Ontario scene performing with his band The Sounds of Light.

Music lovers, you are about to hear one of Jamaica's classic reggae artists like you've never heard before.