Allan, Chad & Expressions (Allan Kowbel) - Hey Ho What You Do to Me! 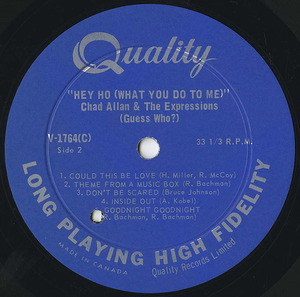 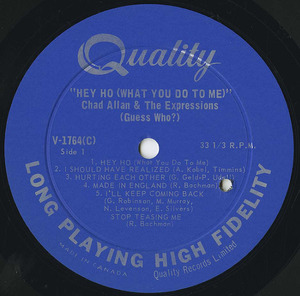 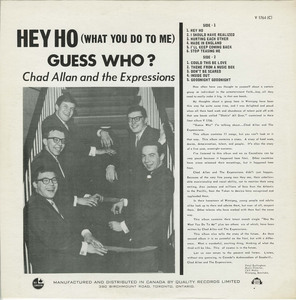 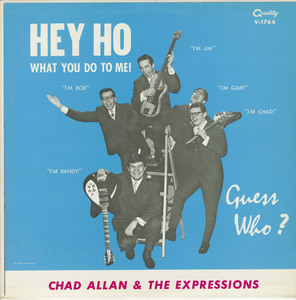 Hey Ho What You Do to Me!

Pre-Guess Who garage beat with strong British Invasion sound. The group was originally named Chad Allan and the Reflections but changed their name due to the American group, The Reflections, who had the hit "(Just Like) Romeo and Juliet". Chad (Alan Kobel) left the group after the 45 release of "Shakin' All Over" to attend college and was replaced by Burton Cummings. Randy Bachman was also a member.

How often have you thought to yourself about a certain group or individual in the entertainment field . . . boy, all they need to really make it big, is that one break. My thoughts about a group here in Winnipeg have been this way for some time, and I was delighted and proud when all their hard work and abundance of talent paid off with that one break called "Shakin' All Over," contained in their first album V1756. "Guess Who" I'm talking about . . . Chad Allan and The Expressions.

Chad Allan and The Expressions didn't just happen. Because of the very fine young men they are, their unbelievable musicianship and vocal ability, not to mention their song writing, disc jockeys and millions of fans from the Atlantic to the Pacific, from the Yukon to Mexico have recognized and applauded them.

In their hometown of Winnipeg, young people and adults alike look up to them and admire them, but most of all, respect them. Other talents who have worked with them feel the same way.

This album contains their latest smash single "Hey Ho What You Do To Me" plus ten others, six of which, have been written by Chad Allan and the Expressions.

This album also tells the story of the future. As their second album it is as powerful as the first, but with a difference. What a wonderful, exciting thing, thinking of what the third will be like. This of course is in the future.

Let us now return to the present and listen. Listen, without guessing, to Canada's Ambassadors of Goodwill . . . Chad Allan and the Expressions
-Daryl Burlingham, Music Director CKY Radio Winnipeg, Manitoba