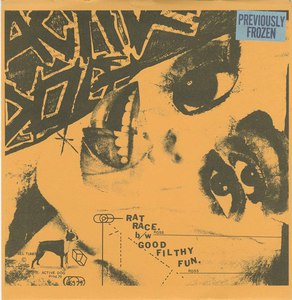 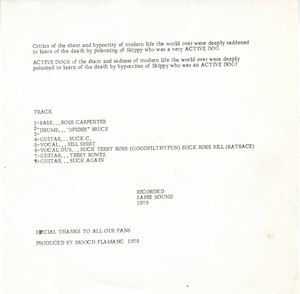 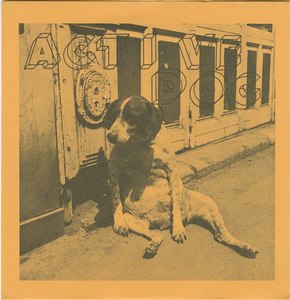 Active Dog actually started in 1976 in guitarist Terry Bowe’s dingy cluttered, basement as ‘Steel Breeze’ a four piece psychedelic heavy jam band. We banged around in that basement, tormenting the neighbours with our loud instrumental craziness for about a year until Terry got married and his wife told us to “piss off and find somewhere else to play that loud crap.“ Jerome quit the band and I suggested we change our name to Active Dog. We were now a three piece

We moved our gear to Robert Bruce’s attic bedroom in his mom’s house on east 15th and Commercial Drive, two doors away from the three story square building where my wife and I were renting an apartment. That building later would become known as ‘Majestic Studios.

I was working as a camera repair technician by day, and recording and writing demented songs at night. I wrote ’Let’s go to Fuckin’ Hawaii’ around this time. I was also in the process of recording Art Bergmann’s new songs in my tiny A3340S home studio, just as his band ‘Shmorgs’ were vaporizing.

we all got extremely drunk at my place one night, and Active Dog was officially whelped.

We had a few smokey jams in Robert’s muralled attic room, but it was way too small now for six drunken looneys, but luckily, the basement at my building became vacant, and as it was well trashed by the previous tenants, (and haunted by a child ghost that we called ’crutch boy’) I asked my landlord if I could use the busted up basement as a ‘storage space’ and as he wasn’t interested in putting any money into renovations, he said “O.K. but don’t change anything“..

We gutted the basement rooms, and covered it with rubber underlay, nailed up old sleeping bags, stapled up thousands of egg cartons, sandbagged the windows, and Majestic Studio was ready for the Dogs. We practiced down there three times a week

I recorded lots of bands in that haunted studio from 1978 to 1982 before Sky Train levelled it, constructed a track support column, and built a tiny pedestrian park.

Bludgeoned Pigs guitarist Tony ‘Baloney’ Walker, and singer Al Jamieson were constant guests, Zippy Pinhead and Los Popularos came by to help out emptying our Gala Keg boxes o‘ wine. (Cecil English recorded my band ‘Antheads’ down there in the splendour that was Majestic.)

Active Dog started gigging in 1978 at the Windmill on Granville Street, it was a wild time.

At one gig there, opening for the pointed Sticks, Buck kicked a guy in the head with his steel toed boots for trying to unplug his guitar while he was playing.

The guy looked very surprised as they dragged his unconcious ass across the beer soaked stainless steel dance floor and out the door, as we played the intro chords to ‘the Beach’.

We played a bunch of Windmill gigs, always fun, but we grew tired of dodging gob and snot rockets, so we devised a cunning plan: I went and bought a couple of ‘Green Avenger’ water pistols and filled them with salty water and yellow food colouring. when the saliva inevitably started to fly, Bill Shirt announced to the moist and garrulous audience between songs, that if anyone attempted to spit at us, he would let them have it with what he told them was straight spaniel piss. The usual suspects laughed and got ready to spit, and as the first mass flew past him, Bill Shirt opened up with both pistols! The once pogo-ing, spitting, white shirts with their thin black ties were now shrieking, covered in yellow faux dog piss. ..Touche’ (amazingly, unknown to us at the time, the Clash were in the audience that night and thought it was hilarious, we went to a crazy east van party with them after the gig) We were writing great mental songs like ’Teen Chow’ and ’Meat eating Betty’ ‘Fucking Idiots’ and ‘Garlic sausage, digital watches’ and our teen opus ‘The Beach’

We practiced and gigged constantly and alternated opening and headlining with the Pointed sticks and Subhumans, DOA, Private School, etc..

The Smilin’ Buddah gigs were always an interesting night out, with Fort Boogie just across the street..

Things started to go wrong a few weeks before we, as a band, were going into Chris Cutresses ‘SABRE’ studio to record our Single ‘Rat Race/ Good Filthy Fun.’

There was something in the air. …something just wasn’t right.

And a few days before we were to record, Gord and Robert announced that they were joining the Pointed Sticks. Robert agreed to drum on the Active Dog single, but Gord was out of town or something, so Buck played Gord’s keyboard part on his guitar and it sounded great. The record was well received by the usual suspects, but there was now no band to help flog it. I put it into Quintessence Records, and a few other ultimately dodgy record shops, but after a couple of weeks of dealing with the sleazy pirate aspects, I decided that the music business was just not worth chasing idiots for money. I pulled all the unsold singles off the market, boxed them up, and they sat sealed for 20 years in the basement of my parents house. Oh well.

I suddenly had lots of free time and Buck was thinking of starting a band called the Modernettes with John McAdams and John Doe from Rabid, and asked me if I’d play bass in it. “Sure, I can do that.”

I went to the first practice at this space Buck had rented in a room under a garment sweat shop on Main street. The sweltering room was 10’x10’ and was built like a brick oven. The door where the poor east Indian garment workers had to toil behind had a huge bolted steel door with the name “Mooch Flamand” scraped into it.

Great, I needed an alternate name and so I stole it.

I became Mooch Flamand, the man that invented himself.

I used that name as the producer on our single, but on the insert, Shirt spelled it wrong and typed ‘Flananc‘ Oh well.

On June 6th 1979 I was busy back at Majestic sitting with Buck learning ‘Surf city strangler’ one of the songs for the first Modernettes gig when I received a phone call, my wife’s sister had just drowned, falling in her bathtub. I quit playing for a while.

John asked Mary-Jo to learn Bass quick!. She did. She was great.

That was the end of my Modernettes enrollment.

Months later, after my family life became less intense, Terry and I started a new band and called it ‘Antheads’ (after a type of freak in a PK Dick Story)

Tony Baloney joined us, along with my brother in law Jon Moore (Drummo)

Antheads played at the Buddah a couple of times a week, with the Scissors and Insex, Secret V’s, DOA Modernettes, drinking beer and playing way too fast..

Terry Bowes quit after a few months, he was getting tired of dragging equipment around until 2:00 A.M. and decided to devote all his time to longshoring and marriage (where the real money and food was)

Antheads played at 85 miles an hour and nobody could understand what we were saying but we didn’t care.

We got a singer named Gus Vassos who was an old North Van high school friend of Baloneys, and blasted off.

Gus fit right in with us, singing in his high whooping whine about ‘the crap that life deals to you‘. We gigged all over, Tony Baloney became a guitar wizard, but Antheads were doomed.

Sky train started east lane construction, and kicked us out of the building at 1715 east 15th ave. and poof! Majestic Studio was gone.

So, I bought a house, built another studio, and started another band ‘Perky Pat’.
-Ross Mooch