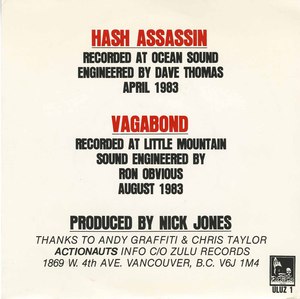 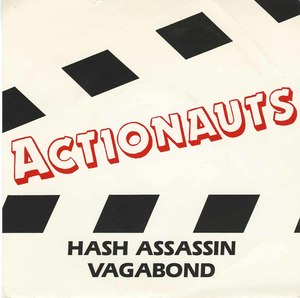 Tony Balony is the first, finest, and to date only, legit guitar hero of the Vancouver punk/new wave scene, a player for whom the adjectives "gangling" and "rubbery" are barely adequate. Onstage at the Smiling Buddha it's frightening enough that within the space of one song he wrenches sounds that combine the atonality of Captain Beefheart, the pop-savvy and flash of Jeff Beck in his Yarbirds prime and the synapse-melting sonics of Syd Barrett-era pink Floyd out of a $100 Fender Telecaster copy and a borrowed amplifier but when he lets slip after a few post-gig lagers that he's not quite of legal age to be in the skid row club to begin with, much less headlining there, the mind fairly boggles."
- Brian O'Nolan, The Georgia Straight

During the early days of the Vancouver punk scene, now justly regarded in terms of sheer talent amassed in one place as the equal of London or New York, a still too young and often too drunk to drive Anthony Walker was front and center at shows by DOA, The Pointed Sticks, Young Canadians, Active Dog, Modernettes and others. Already a ferocious guitarist when Active Dog disbanded he wangled an audition for Antheads, the new group being assembled by the group's bassist and songwriter, Mooch Flamand, to which he arrived carrying his guitar in a garbage bag and it was that discount carrying case that earned him the nickname Balony. Or it may be simply that it rhymed with Tony, who can remember and how could it matter anyway?

More to the point, it was in this band that young Walker made his debut as a professional musician and embarked upon the usual course of endless rehearsals, countless gigs, and minimal paydays, pausing only to release instantly obscure records. What was apparent even in those early shows was that Walker was one of the special ones, what they call in genetics a "sport", a pure fluke of evolution that cannot be replicated.

For one he was a flat out monster of a guitar player who cared less about solos than he did about songs. Beyond that he could write the damn things as well as anyone could and from the first he had what the critics call "a unique voice", in that despite the fact he had obviously gone to school with the best songwriting of the late 20th century and wore his influences proudly - from the Stones, Hendrix, and Bowie through to Sex Pistols and Iggy - what came out was undeniably Tony Walker, or pure Balony, as they case may be.

Walker released the Hash Assassin/Vagabond single with his then-band The Actionauts, a brilliant post-punk, neo-psychedelic pop masterpiece based on Hassan bin Sabbah, the legendary Old Man of the Mountain, founder and grand master of a radical Islamic sect in the 11th century who created a cult of assassins known as the Hashishin from their habit of smoking hashish before their (usually fatal) missions. The single (released on Zulu Records) now fetches exorbitant sums from collectors.

More recently, Walker co-founded the Real McKenzies, a group put together as a one-off to celebrate the joys of Scotch and all other things Scots. So good was the joke that Walker spent the next 7 years touring the world in a kilt, releasing 3 albums and becoming a MuchMusic staple with the national hit Mainland, which Walker wrote and sang (from Clash of the Tartans, on Sudden Death Records.)

-John Armstrong, award-winning music journalist and author of the best-selling book Guilty of Everything.