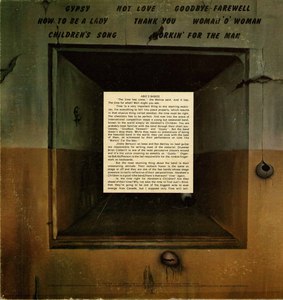 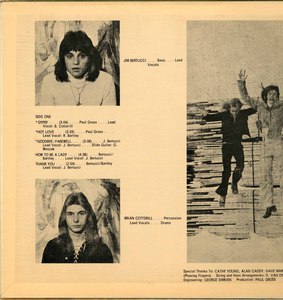 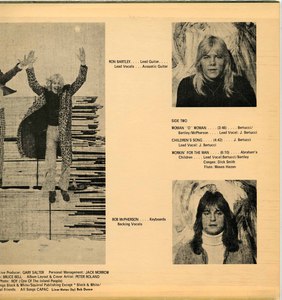 Guitarist Ron Bartley, bassist Jimi Bertucci , drummer Brian Cotterill and keyboard player Bob McPherson got their start in the late 1960's with the Toronto-based Just Us. That outfit subsequently morphed into Captain Midnight's Dirty Feet (great name), but ran into a problem with Captain Midnight's publishers. The threat of legal action was enough to see the quartet opt for another name switch - this time around Abraham's Children.

Signed to the small Toronto-based G.A.S. Records, the band enjoyed a Canadian top-40 hit with their debut 45 'Goodbye-Farewell'. Their 1973 follow-up 'Gypsy' went top-10, leading G.A.S. to finance an LP. Unfortunately, by the time the group started recording the album, musical tensions had begun to flare. G.A.S. executes demanded the band continue to work in a commercial pop vein, while the band members were interested in a harder-rock sound. Guess which side won the fight?

Produced by Paul Gross (who contributed a couple of tracks to the LP), 1973's "Time" offered up a mix of the earlier singles and new studio material. Boasting three lead singers in Bartley, Bertucci and Contterbill, the entire set was enjoyable, with tracks such as 'Children's Song' and 'How To Be A Lady' showcasing the group's knack for writing and performing commercial pop. Imagine a Canadian version of Pilot, or The Raspberries and you'll get a feel for most of the album. The group also enjoyed a third Canadian hit with the bouncy 'Thank You'. It's interesting that the two best songs are also the least commercial. Both 'Woman 'O Woman' and the group-penned 'Workin' for the Man' are thumping rockers, albeit with harmony vocals that make radio stations so happy.

Following the album's release the band underwent an ongoing series of personnel changes that saw Bertucci, Cotterili and McPherson all quit. With replacements the band struggled on for three more years, during which time they shortened their name to 'The Children''. They also released one final non-LP single - 1974's 'Goddess of Nature' on Rampage. The group finally called it quits in 1976.

Bartley, Dinardo and O'Shea subsequently formed 'Bang'. Bertucci continued to record under the name 'Jimi B'. The band has reformed and continues to tour to this day, along with a retrospective double CD titled "30".
-BS, acid archives

An Italian immigrant, Jim Bertucci moved to Toronto with his family at the age of 6. Born Vincenzo Donato Bertucci, the singer/bassist formed Just Us while still in high school along with Ron Bartley on vocals and guitar. They changed their name to Captain Midnight's Dirty Feet after graduation, and along with Bob McPherson on keyboards and drummer Brian Cotterill, soon became staples on the Toronto club scene. They were peddling their home-made demo of the song "Hot Love" at the shows and their name soon spread. They were noticed in 1970 by Jack Morrow at one of the shows, who'd later help launch the careers of such stars as Fat Mouth and Teenage Head. He invited Paul Gross from Phase One Studios, who'd produced such heavy hitters as Rush and Triumph to see the band, who jumped at the chance to work with them.

Within weeks the group had built up a collection of writings and demos and entered Toronto's RCA Studios. However since Captain Midnight was the name of a comic book hero Stateside, legal issues ensued and the band changed their name to Abraham's Children. They inked a deal with GAS Records in '72 and re-released "Hot Love", this time as the 'b side' to "Goodbye Farewell". An Italian version of "Goodbye" entitled "Bye Bye Bambino Occhi Blue" was recorded for the European market, scoring big as well with the ethnic radio stations at home. They caught the attention of Nick Bogart of the US's Buddha Records that same year, most famous for his work with KISS. Almost a full year would pass before their inaugural lp hit the stores. Recorded at Toronto's RCA Studios with George Semkiw (Rough Trade/Queen City Kids) at the controls, TIME showed a diversity seldom seen then or since from a young band. Incorporating flutes, congos and other non-traditional instruments, the new single "Gypsy", along with tracks like "Workin' For The Man", "Woman O Woman" and "Thank You", released as a single in '74 augmented the band's repetoire - spanning pretty much the entire musical genre.

A full cross-Canada tour would ensue, second nature to the band by this point, who'd added second guitarist Shawn O'Shea. They began work back home in Toronto on a second album, using the raw tracks they'd written while on the road. In an effort to show the public they were maturing, they changed their name yet again to simply The Children, and released "Goddess of Nature" late that year as a single to tide people over while working on the new lp. But conflicts with management and musical differences were widening the gap between the directions the band wanted to go, and Bertucci left the band, signing with United Artists to form Angel in 1975, a group more on the r&b side. Meanwhile UA continued rolling the Children wagon along, releasing "Rockin' In The City" and "Deni" that same year and "Boogie All Night Long" and "Christina", penned by Bartley and O' Shea in '75. Despite the continued touring, the band couldn't come to a deal with the label for a new album, and they folded by year's end. O' Shea would go on to form Bang, a short-lived Ontario circuit band, then Lady with Toronto's Sharon Alton, then eventually settle into a writing position at the Toronto Sun.

Meanwhile Bertucci's new project Angel was seeing it's own highs and lows. Though they released "Winning Ways" in 1975 as a single, a name change was needed when Casablanca pointed out they had a heavy metal act by the same name. After changing their name to Space Patrol, they released the single "Burning Love" in 1976. He then formed The Police with longtime partner Bartley the next year, but obviously had to change that name as well to avoid conflicts with Sting and the boys from England. He appeared on BB Gabor's GIRLS OF THE FUTURE record in 1981, as well as co-writing the track "Shake". A year later he released his first full-fledged self-titled solo album, which included the single "Wickless Dynamite" and a remake of Angel's "All American Boy". Several other albums from Bertucci have appeared since, including his electronic avant-garde project Natopus in '85. His latest release THROUGH THE EYES OF VINCENZO was released in 2002. He's worked with Prince, The Steeles, Alexander O´Neil and Kitaro to cement his reputation as an outstanding session player highly sought-after who's capable of practically any musical styling.

The original members of Abraham's Children reformed in 2000 and spent some quality time in Toronto's Amber Studios with George Semkiw, as well as other sessions on occasion. A deal was struck with Bullseye Records in 2001 to re-release TIME. Then in 2004 the band marked it's 30th anniversary with 30, a collection of Abraham's Children, solo Bertucci and new material to rave critical reviews.

This Toronto, Ontario group's roots go back to the late sixties as a band called Just Us and they were later known as Captain Midnite's Dirty Feet (from an American comic strip), but when the strip's owners would not allow the use of the name in the U.S. they adopted the new moniker, Abraham's Children. A 1968 45, The Lovin' Things is also attributed to them.

They basically played melodic pop/rock and Goodbye-Farewell and Gypsy in particular, were hits (the latter an international one). These both figured on their album. Indeed, Gypsy was the stand-out track and one of several melodic pop rockers which included How To Be A Lady, Thank You and Children's Song. Side two is a little more progressive and the rockier Woman "O" Woman catches the ear. Recommended. In 1974 they veered towards a heavier sound and became known as The Children. Shawn O'Shea formed a new group, Bang, in 1976, which also featured Ron Bartley.

They also had one track, Goddess Of Nature, a melodic, mid-tempo soft rock number with strings in the background and a short, but loud, lead-guitar break on K-Tel's Music Power compilation.
-Vernon Joynson and Costas Arvanitis