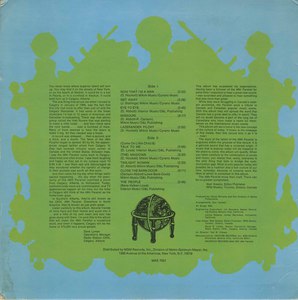 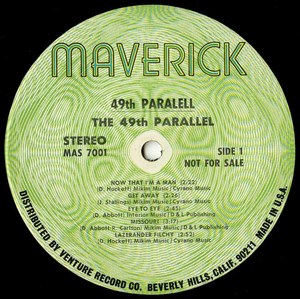 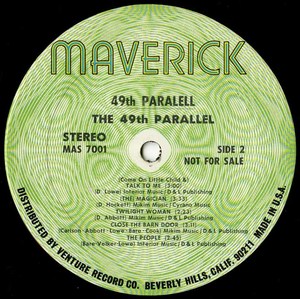 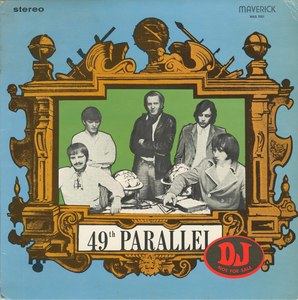 Formerly known as The Shades Of Blonde, who put out one 45, All Your Love, they formed in Calgary, Alberta, in 1966. Line-up 'A' signed with Gaiety Records, an intriguing operation run by Don Grashey out of Hollywood, California and Thunder Bay, Ontario. Their first two 45s, which came out on RCA, are now sought-after. Both prime examples of Prairie garage-punk, they were minor hits in Canada. The follow-up, Blue Bonnie Blue, did little to advance their course, but the guy who wrote the song for them and the women he'd written it about later made the big time as Delaney and Bonnie! Around the same time, Dave Petch left the band and Dave Downey came in for Mick.

Calgary, Alberta's 49th Parallel were originally known in the mid-60's as a popular bar band by the name of The Shades Of Blond. With a stifling and musically limiting Calgary club scene they were never able to get farther than having one single -- 1966's "All Your Love". The tune would eventually pop up on a (now rare) 4 song EP next to an early incarnation of The Stampeders.

As members came and went a name change was introduced as 49th Parallel and over the course of a year a solid line-up developed featuring Abbott, Lowe, Carlson, Petch, Woodhouse and Bare.

The group released three singles on Gaeity Records between mid-1967 and late spring of 1968, at which time Petch and Woodhouse left and Dave Downey was added as bassist and Velker was added on organ to replace Petch.

Throughout 1968 and parts of 1969 they toured throughout North America with an ever fluctuating roster. Despite these shake ups, they did hit and run recording sessions which bore several singles for Venture Records including "Twilight Woman" that managed seven weeks on the CHUM charts with a peak position of #16 in April 1969, and its follow-up, "Now That I'm A Man", in September 1969 which managed a modest 3 week ride on the CHUM charts and a peak position of #22. Velker left shortly thereafter to go to Hollywood.

A full-length album was hastily assembled from singles and studio outtakes because the line-up was continually fluctuating and new recordings were impossible to conduct. This would be compounded by the immediate departure of singer Dennis Abbott following the album's released.

Enter Dorn Beattie, who, along with Lowe, and Petch's replacement Dennis Mundy, Downey and Bare began working on another album in 1970 which was never completed, though the single, "I Need You", did surface (and failed to chart).

Eventually the band changed its name to Painter and released one album before mutating into the hard rock act Hammersmith who would finally succumb in the late '70's after two albums on Mercury Records.

Beattie went on to create All The Rage In Paris, but that too faltered when co-founding keyboardist Doug Johnson quit to form Loverboy. Beattie, in recent years, is now a successful country singer; Lowe continued on with a new version of Painter, 451 Degrees, and Prototype (who also recorded an album). He produced albums by Qwest, Whitewolf, George Fox, Amin Bhatia, and would also be responsible for the invention of the studio production technique called Q-Sound (used by such luminaries as Pink Floyd, Bob Ezrin and Madonna)

49th Parallel found a mild revival in the mid-90's on classic rock radio in the prairies, prompting Pacemaker Records to issue a 'best of' collection