Messenjah is a progressive Roots Reggae band that was founded in Kitchener, Ontario, Canada in 1981.

The founding members are Rupert [Ojiji] Harvey (lead guitar and lead vocals), Errol [Skippah] Blackwood (bass guitar and lead vocals), Eric [Baby face] Walsh (rhythm guitar and vocals) and Ray [General] Ruddock (drums). Later Hal [Saint] Duggan joined the band on keyboard and vocals, which formed the core of the band. Hal Duggan played with the band for many years before becoming a solo artist. He currently lives in Jamaica and performs under the name: Lazah Current.

After a year of great success touring the university and college circuit in 1982 Messenjah traveled to California to record their debut album titled Rock You High. They put it all on the line and made great sacrifices as this was an independent production.

With support from friends, Peter and Michael Rose, the record was released and doing well when the band was contacted by Warner Music Canada (WEA). Messenjah became the first Canadian reggae band to be signed by a major record label.

Rock You High was re-released on the WEA label in 1983 and for the first time reggae was played on the mainstream radio. In 1984 the band returned to California to record their second album titled Session this time supported by a major label. The title track Jam Session received significant air time and its music video received major attention on national television.

In 1985 Messenjah returned twice to their homeland, Jamaica, first to play at the World Youth Festival in Kingston, and then to play at Reggae Sunsplash in Montego Bay. Both events were very successful and the band was well received in their country of origin.

Later Tony [Scraper] King joined the band to play percussions. He stayed with the band for about a year before being replaced by Hailey Yates.

With a heavy tour schedule Messenjah decided to take time off the road and go back to the studio once again as an independent band as they were no longer with WEA. During that period the band came up with a Messenjah classic titled Cool Operator, and the single Crazy received a lot of air and video play in Canada.

Around this same time, Messenjah made appearance in the movie Cocktail with Tom Cruise; they received much needed exposure and were able to tour more extensively, appearing at major venues in the USA and Canada.

After playing at the Sky Dome for Nelson Mandela in 1998, the band members decided to go their separate ways, remaining good friends and appearing on stage together backing other artists.

With several changes in the band's composition throughout the years (mostly drummers), Messenjah kept on touring and recording. In 1998 the band received the prestigious JUNO award for the CD titled Catch De Vibe.

There are some very exciting times ahead Messenjah with a brand new line up consisting of some of the players that were with them in the past years :

In June 2013 Warner Music Canada re-released Messenjah’s Session album in digital format and Rock You High album will be released in July 2014 timing it perfectly with the reunion tour.

After a year of great success touring the university and college circit in 1982 Messenjah traveled to California to record their debut album titled Rock You High. They put it all on the line and made great sacrifices as this was an independent production. 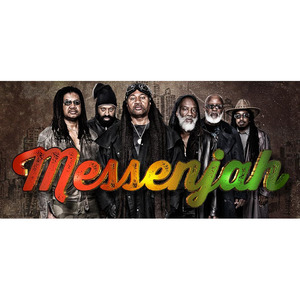