Raymond George Materick (born April 15, 1943) is a Canadian singer-songwriter, from Brantford, Ontario who particularly was well-appreciated in the mid-late 1970s, who continues to perform. He is best known for writing and performing "Linda Put the Coffee On", a major hit single in both Canada and the USA in 1975.

Ray Materick is the son of an evangelical preacher, who had previously played saxophone, trumpet, and clarinet in his own dance band, during the 1940s and 1950s. Materick's recording career commenced in 1972, with the release of Sidestreets on Kanata Records, considered to be one of Canada's first independent record labels. The label folded soon after Materick's album was released. His major national breakthrough came with the release of Neon Rain in 1974 on Warner Bros./Asylum Records, featuring the hit single "Linda Put The Coffee On" (#21 Can.). The album was produced by Eugene Martynec. Materick had been specifically signed by record executive Gary Muth as one of the first Canadian artists on the U.S. Asylum Records label, formed by David Geffen. A number of albums followed throughout the 1970s: Best Friend Overnight (1975) and Midnight Matinee (1976), both of which were produced by Don Potter and featured musical contributions from Daniel Lanois, as well as Fever in Rio (1978). Materick did not continue with Asylum Records, following the release of Midnight Matinee.

During the 1980s, Materick withdrew from music for a period of approximately eight years, assuming employment in a Toronto woodworking company. He later relocated to Hamilton, Ontario.

Materick returned to recording as of 2000, releasing seven albums of new material in two years, and has regularly released new material and compilations since that time. The majority of Materick's later releases have been on his own label, King Kong Records.

In 2012, Materick was subject to two tribute concerts, in Toronto and Hamilton, respectively, by "Honouring Our Own", an organization dedicated to honouring musicians, while living, who have made a lifelong contribution to Canadian music.

In recent years, Materick has been involved in a band project, "Peace On Earth", with Keon Crosswell (bass, guitar) and Dan Kolthof (drums).

Ray Materick toured and performed as a solo artist (and occasionally as a member of a duo) as early as the late '60s. He released his first album, Sidestreets, in 1972, but his label, Kanata Records, folded soon after. Materick then signed with Asylum and released a self-titled album in 1974, followed by Neon Rain and Days of the Heart in 1975, Best Friend Overnight in 1976 and Fever in Rio in 1978.
-John Bush

The photographer was posing Ray Materick, his band and some promotion types for a casual group shot in the dressing room of Toronto's El Mocambo. They sat themselves around a table strewn with cigarette butts, guitar picks and a half-drained 40 ouncer of whiskey, waiting to be focused. Materick and his musicians had just finished a well-received first set downstairs and now, on cue, everyone began hamming it up for the benefit of the camera.

“Just one more,” promised the photographer. Ironically, the walls behind them sported a colourful collage of assorted rock star faces. All the most successful performers, the Lightfoots, the McLauchlans and the Dylans were up there, staring out from the wallpaper like olives in a salad.

Those names represent exactly the kind of international recognition that has eluded Ray Materick. With four albums, two singles and a book of poetry among his accomplishments, the singer from Hamilton, Ont. has somehow missed the limelight. His debut album, Sidestreets, was praised by Canadian critics when it was released in 1972. The Toronto Stareven dubbed it “one of the most remarkable folk albums of the year.” But his singles have received only moderate success. Country music stations plugged “Linda Put the Coffee On” and it managed to make the Top 10 two years ago. “Feelin’ Kinda Lucky Tonight” found more widespread airplay, yet was never considered a legitimate hit.

Perhaps his newest work will become the catalyst he so obviously needs. Both the album and the band which backs him are named Midnight Matinee and the result is a more polished and professional sound. Produced by Don Potter, his latest Asylum recording features songs of forgotten loves, Mexican highs and the struggle of the music business.

Materick is the first to admit that the instrumental backing of Midnight Matinee has given him an effective vehicle to present his songs: “I don’t have to worry about what kind of music the audience expects to hear anymore. With this band I feel I can supply it in all form. They can rock with the best of them. Hell, they even play a mean jazz.

“I always thought my poetry couldn’t be put to uptempo music. A lot of my material is very personal stuff with a kind of mellow mood to it. But with the guys in the band, I’ve been finding that it works. I guess they believe in my music.”

raymaterickriverboatThe members of Midnight Matinee have known each other for some time now. Bob Doidge, formerly of Tranquility Base, has played bass for Materick in the past and he introduced him to guitarist Dan Lanois. Keyboard player Ed Roth and drummer Bill Cymbala were also from Ancaster in the Hamilton area and they accepted an invitation to work on the new album. The band came together in the studio and has remained intact ever since.

Other Canadian folk singers have evolved out of studios with backup musicians and it appears to have become a natural progression. Murray McLauchlan has his Silver Tractors tour with him. Valdy has a new approach with his Hometown Band and is reaching a wider audience now.

Ray Materick has always had the songwriting ability to rank with the best of them. It’s been five years since he left all the dead-end factory jobs to pursue a career in music, and it is understandable that at times he has become discouraged with the lack of acceptance in the North American markets. But, with a distinctive new album and a unique ensemble of musical friends to compliment his songs, he may finally gain the visibility he deserves.

Days of the Heart

The Man in the Thunderbird

Live At The El Mocambo

The Book of Love 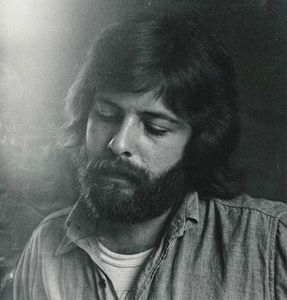