Lisa Dawn Lougheed (born September 9, 1968 is a Canadian former singer, dancer, voice actress, and songwriter. She is likely best known for her role in the animated television series The Raccoons, where she performed for the soundtrack and voiced Lisa Raccoon.

Lougheed was born to mixed race parents; her father is a Scottish-Irish mix from Northern Ontario and her mother is a Black Nova Scotian with ties to North Preston and Guysborough. Lougheed's peers often mistook her mother for a maid.

Lougheed started tap dancing at three years old. She was a dance major at the Etobicoke School of the Arts as a teenager, where she learned ballet, modern dance, and highland dancing. While still in high-school, Lougheed spent three summers as a lead vocalist and dancer in musical revue style shows at Canada's Wonderland, where she sang such solo numbers as When I Think of Home from The Wiz and Le Jazz Hot from Victor/Victoria.

Career
1987-1989: The Raccoons and Evergreen Nights
While still a teenager, Lougheed received a job as a singer and voice actress for The Raccoons. She was hired when Kevin Gillis, the show's creator, was on a Canada-wide search for a new singer.

Evergreen Nights, Lougheed's debut album, consisted of songs from The Raccoons. It was released in Canada under CBC Records in late 1987 and released in Europe in mid-1988. Half of the songs were recorded while Lougheed had a cold. A limited number of copies were released at the time, but the album was reissued on vinyl in 2019 by Return To Analog Records. Lougheed did not know Evergreen Nights was going to be released as an album because she thought the songs were only being used for the show.

Lougheed was a cast member for Youth Beat, an anti-drug campaign by Bell Canada that performed in at least twenty Ontario cities during 1989. She joined after receiving a phone call from an estranged female friend with a cocaine addiction; Lougheed's friend was in the hospital, $10,000 in debt, and would commit crimes to fund her addiction. While touring with Youth Beat, Lougheed worked as a clothing store manager and sang commercial jingles. She was also working on a demo tape and trying to find a contract with a music company.

Lougheed performed in Japan as a backup vocalist for Sheree Jeacocke.

1990-1992: World Love
Lougheed decided to name her second album World Love in August 1990, when the Gulf War had begun. She started recording in the summer of 1991 after signing a contract with Sony Music Canada and released World Love on March 3, 1992 with Warner Music Canada. It was Lougheed's first album to contain songs she co-wrote, which was nine out of the ten tracks.

World Love was intended to have an optimistic message and say "you have the power to make changes and to be nice to other people that you meet." The third track on her album, "Change Takes Time," was inspired by a newspaper story about a homeless man who risked his life to save a family from a burning building.

Lougheed was an opening act for En Vogue, who were performing in front of four thousand people at the Kingswood Music Theatre on May 23, 1992. She participated in the Hospital for Sick Children Foundation telethon on May 30 and a Canada Day celebration at Ontario Place that same year. Lougheed also performed at Niagara Falls' New Year's Eve show, along with Glass Tiger and Prescott-Brown. The event was aired on CJOH-DT and hosted by Nerene Virgin, Ken Shaw, and Kathie Donovan.

In January 1994, Lougheed performed "Won't Give Up My Music" at AidScare, AidsCare; a CBC hosted event that was aimed at teenagers to raise awareness of AIDS and promote safe sex. Jonathan Torrens was the event's host. Additional show members were Sue Johanson, Suzie Landolphi, Snow, The Vacant Lot, and Corky and the Juice Pigs.

Lougheed was also a judge for the YTV Vocal Spotlight in April 1994. She performed at Niagara Falls' New Year's Eve show for the last time, this time alongside Blue Rodeo and Ashley MacIsaac. Ken Shaw returned as a host and with him was Beverly Thomson and Howard Glassman.

Lougheed has presumably since left the music industry. Her most recently credited vocal work was with Celine Dion and R. Kelly.

Ain't No Planes b/w Growing Up

Won't Give Up My Music: Middle of the Madness 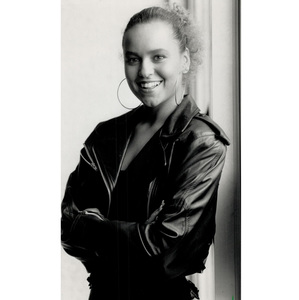