Lorrie first sang publicly at age 11 on Fort William radio station CKPR on a program called School of the Air, which was hosted by Jack Master. At 12, Master's gave Lorrie her own radio show called Harmony Trails. At age 14 she wrote and recorded the song "Are You Mine" with Buddy DeVal, which was released on Abbott Records and reached number 6 on the Billboard Chart. The song became a hit in both Canada and the United States and was recorded by several artists; it peaked at No. 2 on the Billboard and Cashbox charts in early 1956. She was voted Best New Female Singer by fan polls in both Billboard and Cashbox magazines in 1955.

On January 10, 1957 she had her first recording session for RCA, at the RCA Victor Studio 1, in New York. Her first producer was Steve Sholes who had signed Jim Reeves and The Browns in addition to Hank Snow, Eddy Arnold, Chet Atkins and Elvis Presley. Nine months later, on October 31, 1957, Myrna recorded at RCA Victor Studio on McGavock Street in Nashville, with Chester B. Atkins which included a song written by Myrna called "Tradewinds."

Lorrie's first tour in the United States had her opening for country stars such as Hank Snow, Marty Robbins, Johnny Cash, Kitty Wells, and Sonny James. She appeared on the Grand Ole Opry broadcast as a guest of her idol Hank Snow. Later she toured with Faron Young, Skeeter Davis, Ferlin Huskey, and Porter Wagoner. Shortly after, at the age of 23, she formed The Myrna Lorrie Show which successfully toured the Canadian country music circuit performing at fairs, small towns, and the Calgary Stampede until it disbanded in December of 1968.

In 1970, Lorrie received a Juno, the Canadian recording industry award, for Top Country Singer, Female and in 1972 for Female Country Singer of the Year (Melhuish 196). She won a Big Country Award for outstanding performance by a female singer in 1977. On November 1st, 1989, Myrna Lorrie, along with her mentor, Hank Snow, was one of several inaugural inductees honoured by the Canadian Country Music Hall of Fame at the Centre in the Square Theatre in Kitchener, Ontario.

Moonshy b/w Tears Amid the Laughter

Die, I Thought I Would b/w That's What Sweethearts Do

Blue Blue Me b/w I'm Waiting Up For You

Are You Mine / You Bet I Kissed Him 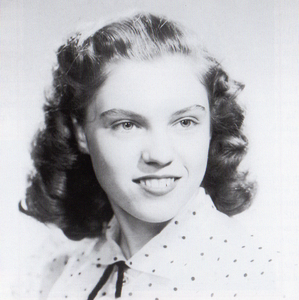