I started life in the town of Cortland, New York. Wrote a lot of poetry about what I saw around me, particularly girls! Took piano lessons and played the clarinet. Lucky enough to be sent away to school at age 15. Went to Windsor Mountain School in Lenox, Massachusetts. This was a somewhat radical educational experience with a dramatic level of integration and open minded philosophical traditions. Continued to be more of an observer than a participant in life. No access to a decent piano, so I played guitar.

Went to University in Rochester, New York. Sat in the Student Union and listened to my friend's and others stories. Observed life and began to write lots of songs, mostly on guitar, although I purchased an Ace Tone organ for $50 from a friend. Had my first opportunities to play briefly in "would be" bands.

A fluke circumstance allowed me to move to Toronto, where I ended up in the middle of a music and comic art community. Made my first record, "Am I Really Here All Alone". It was recorded in cover artist Robert MacIntyre's home, on a decent two track machine. Afterwards, I began to take it around to record companies, primarily to get my songs published. When I sat down with an agent, he said, "Let's hear the product." I realized that I don't do "product". I never went back to the "music industry" again.

I began plans for a second album. A fellow from down the street who lived with a friend knocked on the door and said he heard my first record, was told I was going to make another and offered to play lead guitar. Brian and I started rehearsing and we decided we needed a bass player, then a drummer. I was going out with a woman who shared a house with a woman who was a very good singer. There were some tracks where I could hear her voice, not mine, so I invited Toni to join us. This album was recorded on a 4 track machine which had some limitations for the instrumentation. All vocals had to be sung simultaneously on one track and the organ (yes, the Ace Tone) was played into the final mix as a 5th track.

A few years later, Brian and I talked about a third album and had some ideas for some more complex arrangements. We decided, with Brian's friend Uli, to make a demo to give to the other musician's that would be involved. We went back to the 4 track studio and made a demo in a couple of hours, mixed straight into a final mix. I took home a few cassette tapes. For a variety of reasons, mostly financial, this project died. However, I believe that the demo has some wonderful playing by Brian and, in spite of glitches, it is still reflective of the music, so I have released it as "Real Classic - Unfinished".

Real Classic was done in 1979 although not made into anything beyond the cassette copy for many years. While I wrote songs occasionally in the 80s and 90s, I actually began to play more in public, which I had mostly avoided when I was younger.

The focus of my writing eventually shifted to writing Oz books. What is an Oz book? The original stories about Dorothy Gale in the land of Oz are now in public domain. I wrote a well received book called, "The Witch Queen of Oz", of course, self published. A sequel, "The Master Crafters of Oz", which is recently released, completes what I want to accomplish in Oz literature and will probably be my last novel in this genre. (I do have a short Oz story, for which I am awaiting final art as I write.)

Turning my attention back to song writing, I decided to take songs written over a span of 40 years and make a new album and I am in the studio with Brian on guitar and Uli on bass now. I expect this album to have drums, a bit of sax, two different styles of violin and, in addition to my singing, there is one song to be sung by my wife Janice and another by my daughter Erica! This album will have 17 tracks. I still have enough material for another album, even if I never write another song. (I'm sure I will write more, but it won't matter if it takes a week or a decade. I write for me, not for any other reason.)

I live in Glen Williams, Ontario. I play live regularly in the neighborhood. In the past I have run song writing workshops for teens at a wonderful camp named Unirondack. I expect that sooner or later I will do that again. I enjoy hearing from people who have found and appreciate my music. I do not have a web site, but am not hard to find!

Am I Really Here All Alone? (re-issue) 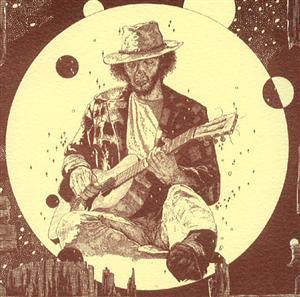