Background
Prior to his arrival in Toronto in 1968, Kymlicka had studied with Emil Hlobil at the Prague Conservatory and the Academy of Musical Arts and completed a ballet, piano and string quartets, a cello concerto, and some 20 film scores. By the early 1970s he was established as one of Canada's leading studio arranger-conductors, handling music for the CBC radio shows of Ivan Romanoff and others and for recordings during the decade by such popular artists as Bill Amesbury, Peter Appleyard, Peter Foldy, the Good Brothers, Ray Materick, Anne Murray, Suzanne Stevens, Sweet Blindness, and Ian Thomas.

Conductor/Composer
Milan Kymlicka conducted his own compositions and arrangements, namely, In the Evening (1971), Clockwork Orange... Music by Milan (1972), Collage (1974), and Milan Kymlicka Orchestra (1975). His Scheherazade - A Journey, performed under his direction, was telecast 12 Dec 1976 on the CBC's 'Music to See.' He also contributed arrangements to the McPeek Pops Library (eg, of 'Snowbird') and in 1987 wrote the arrangements and orchestrations for The Orchestra, recorded with the Toronto Philharmonia Orchestra with Peter Ustinov as narrator.

Music for Films
Kymlicka wrote regularly for the CBC radio program "Continental Holiday," directed the CBC television series "Music of Our People" in 1974, and in 1976 wrote music for "The Revelation," a CBC radio special. His commercial work also included the soundtrack of "Ontario: Yours to Discover" ads 1982-7. Kymlicka completed scores for feature films (eg, The Reincarnate 1971; Wedding in White, 1972; Babar: the Movie, 1989), TV series ('Alfred Hitchcock Presents,' 'Babar,' etc), the CBC/National Film Board co-production 'The King Chronicle' (1987), and many CBC radio dramas (including productions heard on 'Playing for Keeps' and 'Canadian Free Theatre'). He received numerous awards for his work: a Genie for Margaret's Museum (1996); nominations for Matusalem, La Vie d'un Héro (both 1994); and Babar the Movie (1990).

Among his other solo and chamber compositions were a Sonatina (1957, Leeds 1975), Four Pieces (1961, Leeds 1974), Four Valses (1984), and Five Preludes (1986) for piano (the last three recorded by Antonín Kubálek); Two Dances for clarinet and piano (Leeds 1970, recorded by Avrahm Galper); and Partissima for solo violin (1985) and Cassation for two violins, viola, clarinet and bassoon (1986), both commissioned by Les Amis Concerts of Toronto. He was a member of SOCAN.

Another Look: Classics in a Modern Mood 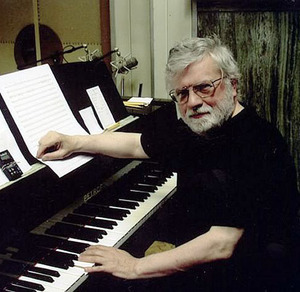