Kensington Market was a Toronto based rock band, active from 1967–1969. Named after a downtown Toronto neighbourhood, it was formed by singer/songwriter and guitarist Keith McKie (born November 20, 1947 in St Albans, England, immigrated to Canada in April 1953), formerly with The Vendettas, with guitarist and pianist Gene Martynec (born March 28, 1947 in Germany) from Bobby Kris & The Imperials. The original line up was completed with former Vendettas' bass player Alex Darou (born January 6, 1943 in Sault Ste. Marie, Ontario) and drummer Jimmy Watson (born August 23, 1950, Belfast, Northern Ireland). Former Luke & The Apostles frontman, singer/songwriter Luke Gibson (born November 5, 1946 in Toronto) was added later in 1967, and the synthesizer player John Mills-Cockell (born May 19, 1943 in Toronto) was a member in 1969.

Brought together around May 1967 by musical entrepreneur Bernie Finkelstein, the Market debuted at the Night Owl on June 4 and performed initially in Toronto coffeehouses such as the Red Gas Room, and high schools. In mid-August, after the dissolution of Luke & The Apostles, the Market recruited Luke Gibson by which time they had already released two singles for Stone Records. These singles achieved minimal success but Finkelstein was able to sign them to Warner Brothers in New York City. In 1968, the Market did the soundtrack to the NFB film The Ernie Game. Later that year, they released the album Avenue Road, produced by Felix Pappalardi, followed by a tour of the United States. In 1969, keyboardist John Mills-Cockell joined, and their follow-up, Aardvark, was released, once again produced by Pappalardi, followed by their second US tour. However, this wasn't done in enough time to save the splintering band who split that same year.

Although it was short lived and did not enjoy great commercial success, Kensington Market was one of the first Canadian rock bands to develop a style – texturally complex, lyrically eloquent – independent of US and British models. Its LPs did not capture the exuberant, improvisatory nature of its live performances. Darou died in the early 1970s. Watson retired from the world of music. Finkelstein founded True North Records. John Mills-Cockell went on to record with synth-prog band Syrinx before trying his own solo career – both projects were on Finkelstein's True North Records. Pappalardi died on April 17, 1983 from a gunshot to the neck. Martynec subsequently worked in Toronto studios, while Gibson and McKie have had minor and intermittent solo careers. Gibson made the LP Another Perfect Day (TNorth TN6) in 1971 and McKie released Rumors at the newsstand (Quantum QR-81003) in 1981.

I Would Be The One b/w Bobby's Birthday

Witch's Stone b/w Side I Am

I Would Be the One b/w Speaking of Dreams

Help Me b/w Half Closed Eyes

Made in Canada 4 comp 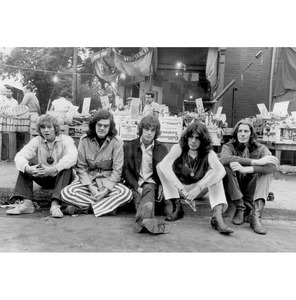