Born Kelly Cavanagh in Oakville, Ontario 1954, Kelly grew up in Montreal. At the age of eight he began classical voice and piano training, and joined St. Matthias church choir singing soprano. He sang and toured with the choir for five years, including the New York World's Fair in 1965. He eventually became head boy and recorded an album of the anthem Hear My Prayer by Mendelsohn.

His first secular appearance was open stage night at boys' summer camp. With a friend playing guitar accompaniment and his new white sneakers on, their rendition of California Dreaming was only memorable for him because someone had pushed him into the swamp outside the hall before the show. One shoe brand new, the other looking like swamp thing had been all over it (and smelled really bad). At about the same time Kelly began playing electric bass, in 1966. Big influences at the time - the Beatles, Herb Alpert, Frank Zappa, Paul Revere and the Raiders, Lovin' Spoonful, anything Motown.

Moving to Toronto with his family in 1967, he joined his first rock band, playing bass. He joined school band to avoid cadet training, choosing flute as his second instrument. After buying an acoustic guitar and some fingerpicks, he consented to taking lessons but only lasted five sessions. He moved up to a Fender Precision bass for his main instrument (bought from Bobby Curtola's bassist!). Big influences from live shows attended - Sly and the Family Stone, Jimi Hendrix, Taj Mahal, Dr. John, Sonny Terry and Brownie McGhee, Jesse Fuller, Bruce Cockburn, Eric Clapton, and from recordings Mississippi John Hurt, Leo Kottke, Fred Neil, Gordon Lightfoot, Van Morrison, The Band, Jethro Tull. He bought his first brass bottleneck slide and started fooling around with open tunings, and began to write the first of what would be many hundreds of songs.

Kelly continued playing bass and some flute with a garage band. The repertoire was mostly electric blues, but with a twist. The rhythm guitarist had a room mate with an extensive record collection which they plundered for unusual and obscure blues songs to cover. At the same time Kelly moved toward folk and acoustic music, going to shows at the Riverboat and Mariposa Folk Festival. In late 1970, together with two friends he created Buck Creek, an all original acoustic folk trio. All three sang lead vocals and harmonies, with six and twelve string guitars and Kelly playing flute. At the time there was nowhere for a folk trio to play in Toronto. The band drove out to Vancouver and landed a one night a week gig at a pizza joint in Port Coquitlam. They also did free concerts at People's Park and street performing in Gastown and English Bay. At the end of the summer all returned to Toronto, but Kelly knew he would be returning to the west coast.

In 1972-73 Kelly became involved with Thog theater group, and began organizing music festivals and concerts at Bathurst Street Church (now Theater). He formed some long lasting bonds there, and began to be influenced more by those around him, such as Perth County and Brent Titcombe. In the beginning of summer 1973, he took his new mandolin and backpacked to BC. On the way he recorded the first of two radio shows for CKUA in Edmonton with Holger Petersen.

Kelly adopted the stage name Huckle (given to him by a friend in Toronto who refused to call him anything else), and lived first on Gabriola Island. He helped organize two western tours by Perth County, and performed the warmup act for some of the shows. In spring 1974 on the first tour a live recording was made of eleven Huckle songs. These tracks became his first album Upon a Once Time. One of the very first indie records, it is now rare vinyl and has sold for outrageous prices on eBay.

In summer 1974 Huckle moved to Salt Spring Island and joined the wildly popular local band Sodbusters. They threw boogies at community halls up and down Vancouver Island, the Gulf Islands, and the mainland. They also had a grant to tour and perform in prisons and work camps. That fall they recorded an album with Si Garber in Vancouver, now also rare vinyl.

After a winter in Central America, a summer 1975 tour in Eastern Canada included performances at many folk festivals (including Home County, Northern Lights) and coffeehouses (including Black Swan, Yellow Door). Paul Gellman and Huckle did a cross Canada tour that fall, and landed back on Gabriola Island. They formed a band, Wild Blue Yonder, and did a western Canada tour in spring 1976, including a second radio show live at the Hovel with Holger Petersen. A third tour in fall 1976 as a duo with Tom Agostino introduced the second Huckle album Wild Blue Yonder, now, you guessed it, rare vinyl. Also that year Huckle taped a national radio show, Touch the Earth, with Sylvia Tyson and Bill Garrett.

In 1977 Huckle moved back to Salt Spring and started a family (two sons, River and Tynan). He began performing solo again, on the island and in Victoria. This eventually led to the formation of Real Fantasy Band. He teamed up with some jazz fusion players (including Hugh Fraser), complete with horn section, and played festivals and shows with them for three years. Huckle's third album, Real Fantasy, had band recordings on side one and acoustic solo tracks on side two, released on cassette only.

The website hucklesownhomepage is devoted to Huckle's music, with songs remastered for digital media, lyrics, video, and photos of hippies.

On Salt Spring, a local band begun as a six piece (with Huckle, Rick Nunez, Doug Rhodes, Kathy Stack, the other Doug Rhodes, and Valdy) quickly became a trio and continued on for 25 years with one personnel change. The band backed up Ken Hamm for a west coast tour in the early 80s. Sometimes known as Amazing Rhythm Method, other times Horse Badorties. In the 90s the band eventually became Frenz! with the addition of three female singers, Simone Grasky, Sandra Profitt, and Sarah Gallagher. When Sarah left they were joined by Elyse Grasky and Sheila Profitt. With this band Huckle really began to get the feel with slide guitar, on electric first. Now listening to Ry Cooder, Bonnie Raitt, Dire Straits, and a whole lot of Little Feat.

After a winter on Maui, Huckle joined a mime and music act, Dolphin in the Sea, doing shows in Victoria (McPherson Playhouse), Vancouver (Soft Rock Cafe), San Francisco (Old Waldorf), and Los Angeles (the Roxy). They also did a recording session with Peter Kaukonen in California, and a TV special in Victoria.

With a basic four track reel to reel tape recording setup, Kelly began a series of home demos which led to him developing a high-tech single act, Music + One, his main gig for the next ten years. Moving to Vancouver in 1985, a real shift in writing style came about. Now listening to Trouble Funk, Teddy Riley, and Parachute Club, the next album, delux, recorded with Bill Buckingham producing, was funky R&B/Dance. Then in late 1988 Kelly formed a trio, Big Deal, with Pat Steward on drums (from Bryan Adams' band), Dave Kilner on bass, and guests John Ellis, Gerry Barnum, and others. They did one west coast tour together, seriously rocking every venue.

From 1989-91 Kelly made three trips to Tokyo, taking his one man band and his new midi guitar, sometimes playing with (and staying with) Joe Mock. He played a small but hugely popular club in Roppongi for foreigners, curious Japanese, and touring rock stars, some of whom would sit in after hours (Jeff Healey, Paul Young, Vivian Campbell, Nogie Edwards of the Ventures). He also played guitar for the eight piece soul/R&B band Science International at Pickford Live Hall. In the studio for Toshiba/EMI he recorded a number of karaoke vocal tracks for big yen. On the third visit he took a two week trip to Thailand, another place he would return to.

Back in Canada, Kelly took a one year course in analog and digital recording, built up a home studio and got seriously into writing and recording. He has since mixed, engineered and produced many projects for others (Bruce Millar, Gaye Delorme, Terry Warbey, Harry Warner, Sandra Jean) as well as his own projects. His vocal/fly girl group DLX scored a local hit on dance radio Z95 in Vancouver. Lovin Thing, produced by Kat Hendrix, was released on the compilation cd Synesthesia.

In the mid 1990s Kelly began playing acoustic guitar again, in open E tuning with brass bottleneck slide. What started out as therapy evolved into the music he plays today in concert. Back to Robert Johnson style Delta blues at first, he was again mostly influenced by those around him (Ken Hamm, Gerry Barnum, Bill Johnson), and began writing his own blues songs. After releasing album five, White & Black & Blue (on cassette only), he redeveloped his fingerpicking style and built up an instrumental repertoire as well. Moving back to the Salt Spring/Victoria area in 1998, he adopted the stage name KC Kelly. With his new steel guitar the sound really started to take shape on album six, What to do, released on cassette.

Beginning to travel again, KC spent a winter in Santa Barbara (Cold Spring Tavern, Palace Grill, KTYD) and made the first of many appearances at Seattle's Northwest Folklife Festival. Performing on Victoria's Inner Harbour was his summer vocation for many summers, selling cassettes, then cds of his original music to visitors from around the world. He also began doing feature concerts at folk clubs on Vancouver Island. On Salt Spring in 2001 KC recorded his seventh album, KC Kelly. After a trip to Thailand for a gig at a five star resort and a return visit to Japan, he returned to Canada. He released KC Kelly as his first cd on April 1, 2003.

KC joined the stage band for Caravan Theater in the Okanagan for summer 2003 for the play Joan Henry. That year the entire interior seemed on fire, and the company had to evacuate for a week. After that the show went on.

May 1, 2004 marked the release of KC's first instrumental cd, Instrumentally Sound. A collection of originals played solo on the steel guitar, it has proven to be as popular as the first cd, and has been used as background music in a number of films.

Later that year KC went to Toronto, South Carolina, and then went to live in New Orleans until April 2005. Playing regularly on Royal street in the French Quarter and the banks of the Mississippi, he also did a radio show for WWOZ, and gigs at Neutral Ground, Turtle Bay, and his own show at Tricou House on Bourbon street (starting at 2 am on Friday and Saturday!). Many of the songs on his next cd were written then.

KC spent the next three years between Victoria for the summer and Santa Barbara for the winter, with a return to New Orleans in 2007. Back on Salt Spring in July 2008 he released his second cd Kingdom Come, and is presently doing cd release shows for his new cd Wild Card, released in August 2009. It's been a long stretch of recording in the studio and building websites, very much looking forward to more live performance! 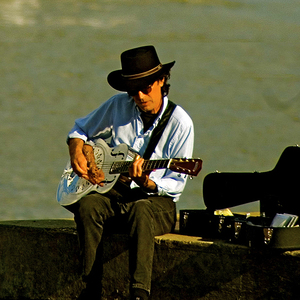 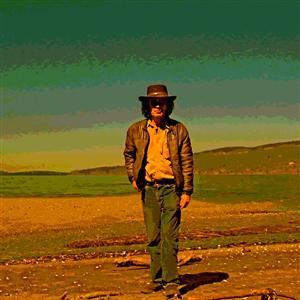