K and Other Stories

The links above take you to a place where you can download the music for free. The songs were by the band that I was in in the 1980s. We were for the most part known as K. The compilation and the printable cover can be downloaded individually or together as a zip file.

The point of this is posterity, an acknowledgement of the years, creativity and hard work we put in. The experiences that accompanied the music could fill a novel. But here is the gist of it.

Our career began on Toronto's Queen Street music scene as a three-piece named Kultur in 1982. Our arrival was less than welcome. We were melodic, the guitars chimed, we harmonized vocals (or tried to) - all anathema to the dark and dirgey order of the day. But we persevered, garnered a grudging respect, and scenes change.

Scott joined in 1983. Soon after, we 'shortened' our name to K, after the main character in Franz Kafka's The Trial.

Late that year, we released the vinyl single Sliding In/A Thousand Years on the short-lived indie label Assembly Language. Although we didn't sell many records, both songs charted top 10 at college stations in Canada and the U.S.

We followed through in 1984 with a video we made ourselves for Voice In The Bush, a song taken from a well-received demo that included November and The Only Way. The video went on to be the most requested of the summer on Canada's Muchmusic network.

The powers that were then held us in their gaze, including a major record company. We had a de facto hit song, but no money or means to put it out.

It was not an advantageous position.

All manner of movers and shakers offered their services, from the well-meaning and connected to the sleaziest of weasels. And of course it was also a heady time - packed gigs, local fame, national exposure, and the usual rock'n'roll excess.

(A side note: Every Day Is A Holiday is the 'lost' song from the 1984 demo, cut at my request for reasons too elaborate to go into here. A major contributor to the demo was John Tucker, who taught audio to myself and Greg at the Ontario College of Art. John's string arrangement for Voice In The Bush was an especially valuable addition.)

We auditioned for the vice-president of the major in our rehearsal space. On his say-so, the president came over a couple of weeks later. He, however, was circumspect and non-committal, not to mention frighteningly proud of having signed Glass Tiger.

And we had changed in the months since we had last recorded - as evidenced by the songs we would commit to tape in 1985. We were less poppy, more expansive. Put it down to a combination of drugs and a new-found love of the music of Scott Walker.

At any rate, the 1985 demo impressed many, but deflated commercial interest in the band. By the end of the year, disappointed, frustrated and yet with still too much ego to fit into one room, K called it a day - sort of.

At the beginning of 1986, James joined. Band politics dictated that we also change our name - Playhouse 90.

A return to a more accessible sound and strong live shows brought us indie label interest and positive buzz in the media. The video we made for Love Is An Easy Lie received airplay. Even so, the clock was ticking.

Greg entered the all-consuming film industry. And the writing was on the wall for the rest of us as well. Given the circumstances, I went solo. The music would become strictly recording from then on.

You Can't Stay Away and the rather prophetic Once Around The World are myself accompanied by Elliott in the studio. The songs on the final, 1989 demo include Greg.

A very homemade video for 1989's This Town received good reviews. I was, however, trying to position myself less as a performer and more as a songwriter. To that end, Good Man's Law was an attempt to craft the most commercial tune I could summon. There was positive feedback from industry contacts - but that was usual, and in itself no longer enough.

There are more songs, and some live apocrypha we couldn't access, but the compilation represents the best of what was recorded.

Many thanks to Steven Toepell for a fine remastering, sometimes with nothing more than a cassette to work from. Thanks as well to Greg for the impetus to digitize and put this project together... Erich

K and Other Stories 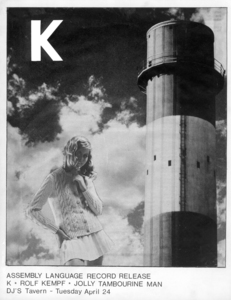 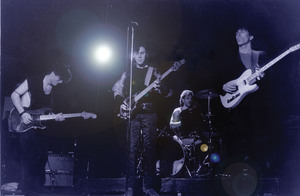 K at the Horseshoe Tavern 1985, perhaps 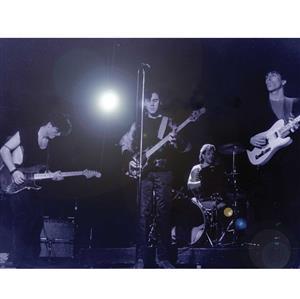