THE JOLTS are well known as being the best rock n roll band in Western Canada. From charting college radios across the country with every release since formation, to their numerous cross Canada tours playing every nook and cranny. Their 6 year history has seen them opening up for most of the touring heavyweights that make their way through Vancouver to rave reviews of concert goers and critics due to a high energy stage presence and quality musicianship. 2010 has been a busy year for THE JOLTS and has seen them recording a new full length record, and solidifying their best lineup to date. Highlights of the year for THE JOLTS include headlining a massive punk rock party in Vancouver celebrating EX-BLACK FLAG, RON REYES 50TH BIRTHDAY and a headlining slot alongside UK punk legends DEVIATED INSTINCT at Vancouver's DISTORT FEST and an Olympic protest show with Vancouver punk legends D.O.A. right in the heart of the infamous Down Town Eastside.

The new record, 8% will be co-released on Joey Keithley's Sudden Death Records and THE JOLT'S own Haute Voltage Records. 8% is a testament to the versatility of their sound and songwriting. THE RAMONES hooks and progressions are still there but the music has evolved into being more than just a punk rock record. It flirts in the same crowd as ROSE TATTOO and MC5 as well as HANOI ROCKS and THE DAMNED. With all of these comparisons, THE JOLTS remain a sound all their own and have every town and bar in their sites to bring their supercharged rock n roll. They will be on tour supporting their new full length 8% August – October. 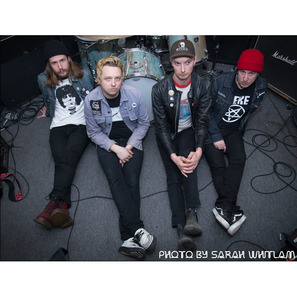