Mel Hyland of Edmonton, Alberta, grew up with his own arena and practice bucking horses. There could be no other career choice but rodeo, and in 1966, he joined the pros. It took him just one year to qualify for the National Finals Rodeo, and by the time he was done, he had reached rodeo’s ultimate event 11 times, winning world saddle bronc riding titles in 1972 and 1976. Hyland was the first cowboy to win the Canadian and PRCA saddle bronc riding championships in the same year, doing so in 1972. His Canadian titles came in 1967, 1972, 1979 and 1982 in saddle bronc riding and 1974-75 as a bareback rider. He also served on the CPRA board of directors in 1974-75. Hyland considered his ride on Reckless Red at the 1967 Cheyenne (Wyo.) Frontier Days to be the best of his career. Others consider it to be the standard of what a truly classic ride is. Videos of the ride are mandatory in some college rodeo classes today. Known by his rodeo contemporaries as “Big Bull,” Hyland is remembered for his riding ability, classy stand and professional attitude.

In 1972, he became the first ever man to win the Canadian Saddle Bronc Championship and also win the World Title in the same year. He was also the youngest Canadian to win a Canadian saddle bronc championship in 1967 at the age of 18.

Mel Hyland exemplifies the true spirit of a professional cowboy. At the height of his career, he dominated the Canadian Rodeo’s Saddle Bronc Riding Event as the undisputed king of Bronco riders in North America in the 70’s and 80’s. After turning professional at age 19, he finished seventh in the worlds in his rookie year and from there, his career soared. He qualified for the National Finals Rodeo in saddle bronco riding every single year over a ten-year period and ranked in the top ten from 1967 to 1984. He seized the Canadian championship a total of four times (1967, 1972, 1979, and 1982) and the world championship twice (1972 and 1976) earning the honour of being the only person in rodeo history to have ever won the World Championship and Canadian Championship the same year (1972).

He has won every major rodeo in North America at least once and acquired career earnings in excess of $300,000 during his 22-year career. In 1981 he was named Cowboy of the Year, the highest honour given in the Canadian Rodeo.

Mel’s rodeo career began at an early age. He was able to ride in full size saddle at age four and graduated to steer riding at age six. He was ten when he paid his first entry fee to compete. His early coaching sessions were given by his uncle, Keith Hyland, a former Canadian Champion. Retired since 1984, Mel currently lives in Ponoka where he continues with Saddle Bronco Schools, Colt Starting and Horsemanship Clinics. 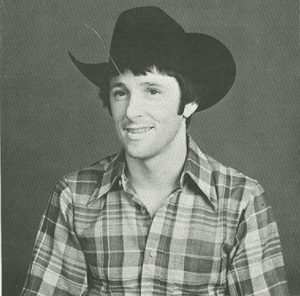