Hugh Hagood Hardy, CM, composer, arranger, vibraphonist, pianist, percussionist (born 26 February 1937 in Angola, Indiana; died 1 January 1997 in Hamilton, Ontario). A major figure in the Canadian recording industry, Hagood Hardy had a successful jazz career, composed extensively for film and television, and had gold and platinum records as an easy listening artist. He was perhaps best-known for his hit single “The Homecoming,” which he originally wrote for a television commercial. He received ten Juno nominations for Instrumental Artist of the Year, winning twice, and was a Member of the Order of Canada.

Early Years
Hardy was born in Indiana to a Canadian father and an American mother, but his roots in Canada were deep. His great-uncle, Arthur Sturgis Hardy, was a Liberal politician and Ontario’s fourth premier (1896–99). When he was an infant, Hagood’s parents moved with him to Brantford, Ontario, where his grandfather was Judge of the County Court. Hardy’s family eventually settled in Oakville, where he studied piano with Edna Lawrence and Ellen Scott. He began playing the vibraphone in his teens.

Early Career
While earning a BA with a double major in political science and economics at the University of Toronto, Hardy took private music lessons with Gordon Delamont and performed in local jazz clubs and on CBC Television. He led his own group from 1957 until 1961, when he went to the US and played vibes for bandleader Gigi Gryce (in New York, 1961), flautist Herbie Mann (on tour, 1961–62), and pianists Martin Denny (in Hawaii and Las Vegas, 1962–64) and George Shearing (on tour, 1964–67). Hardy would later credit Shearing as a major influence.

Commercials and Composing
Upon returning to Toronto in 1968, Hardy founded Hagood Hardy Productions, which eventually specialized in commercial jingles for companies such as Kelloggs, General Motors, London Life, and Canadian Pacific. Also that year, Hardy formed a jazz trio with Ian Henstridge on bass and Ricky Marcus on drums. With the addition of singers Stephanie Taylor and Carrie Romano in 1969, the group became The Montage. A pop group with jazz and Latin American leanings, The Montage were active until 1974, mainly touring in the US and Europe.

In 1975, Hardy revised and recorded “The Homecoming,” which he originally composed in 1972 as a jingle for Salada Tea. Released by Hardy on his Isis Records label as a single off the album of the same name — subsequently distributed by Attic Records — the song became an international hit. Hardy received Juno Awards in 1976 for Composer and Instrumental Artist of the Year, and was also named instrumental artist of the year by Billboard magazine. In 1977 he was awarded another Juno for best instrumental artist, and received the Wm. Harold Moon Award (bestowed upon Canadian songwriters for great international contributions) from BMI Canada (now SOCAN).

Post-Composing Performances
Hardy released more than a dozen pop-instrumental albums under his own name. Beginning in 1976, he performed programs of his best-known jingles and film music in symphonic “pop” concerts across Canada — either at the head of a small ensemble or as a soloist with symphony orchestras. In 1990, he introduced a jazz band in the hard bop style. They released the CD Morocco (1990) and performed on occasion in Toronto clubs.

Album Sales
Dreamy, charming and emotionally evocative, Hardy’s music sold over a half a million copies in Canada. His debut album, The Homecoming, sold more than 200,000 copies in Canada, earning it double platinum status, while “The Homecoming” achieved gold single status in Canada. The compilation albums The Hagood Hardy Collection (1979) and All My Best (1988) both went gold, while A Christmas Homecoming (1980) and Alone (1995) both went platinum.

Plagiarism Lawsuit
“The Homecoming” was the object of the first music plagiarism lawsuit in Canada: Gondos v. Hardy and Toth. The unsuccessful suit, which alleged copyright infringement, was brought in November 1980 and dismissed with costs in July 1982. Despite being vindicated, Hardy found his composing career was temporarily interrupted. He ceased jingle writing in 1983.

Organizational Involvement and Honours
Hardy composed “In My Heart” for the Canada 125 celebrations in Halifax in 1992. The following year, he established the Elora Fireside Jazz series in Elora, Ontario. He served on the boards of numerous organizations, including the SOCAN Foundation. Among his many charitable commitments, he was honorary chairman of the Canadian Cystic Fibrosis Foundation and a UNICEF ambassador. He ran as the Liberal Party candidate for the Toronto riding of York South in the 1995 Ontario provincial election, but lost to NDP candidate Bob Rae.

In 1992, he was named a Member of the Order of Canada, and in 1996 he received the Toronto Arts Foundation’s Lifetime Achievement Award. The SOCAN Hagood Hardy Jazz/Instrumental Music Award was renamed in his honour in 1997, following his death from stomach cancer earlier that year.

Instrumental Artist of the Year, Billboard (1976)

The Garden Path b/w Won't You Step Into My Life 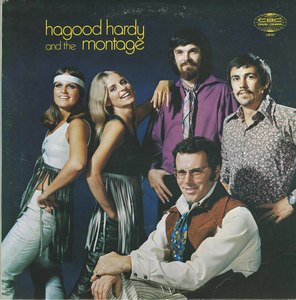