Long ago, there was once a time in Korea when the money involved in the entertainment industry linked to the U.S. 8th Army was greater than the entire gross national income of the rest of the country. This fact, along with various other historical sources, shows that much of Korea’s postwar pop music was born and forged in the melting pot that was the so-called ‘army-base’ culture. The 8th Army scene’s sphere of influence was often pan-Asian and at times reached beyond Asia itself: take the Kim Sisters, who were playing Las Vegas by the late 50’s (and paid $15,000 a week – as big time as it gets) or Ok-hee, who went straight from the base scene to Las Vegas, without a stint in Korea’s local pop music market. This attests to the sheer scale and the level of competition found in the 8th Army entertainment scene. In the entertainment world, making it to Las Vegas has always been emblematic of ultimate success, and it is striking and unprecedented that so many Korean girl groups of the past have succeeded in doing so. Even though in the case of groups such as the Korean Kittens (ft. Yoon Bok-hee), the Lady Birds (ft Jang Mi-hwa, usually performing in Canadian venues), and the Seoul Sisters (ft. Ok-hee) almost no recorded material survives, their legendary achievements attest to the depth and density of Korean popular music at the time. It’s particularly painful that no work survives of the Seoul Sisters, who are said to have performed soul numbers like ‘Funky Broadway’ and ‘Land of 1000 Dances’ alongside Don Ho at the Flamingo – the hottest hotel stage in Las Vegas.

The Happy Dolls, with a single surviving album from 1978 released in Nova Scotia, Canada, represent the last of the 5-piece girl groups who would perform mostly in the Las Vegas and other North American scenes. Chronologically, their work comes from a time when the entertainment industry’s centre of mass was shifting from the 8th Army scene to the domestic ‘gayo’ market. Although the Dolls performed mainly around Toronto and their album was recorded in Canada, their roots go back to Korea, circa 1970. The Dolls got their true beginning when Kim Myoung-ok (aka Nami) – the youngest of the group at age 14 – joined the lineup and they headed to Saigon, Vietnam under an arrangement by Universal Records, a Korea based record label. By this time, Kim was already a star in her own right, having cut her teeth in the 8th Army as well as other venues. They had earned nicknames like ‘Baby Team’ and ‘Korean Jackson 5’ from U.S. soldiers (since songs like ‘Ben’ was a favourite among their repertoire) during their 2-year stint in Vietnam, after which they returned to Seoul in 1973, going on to play major clubs such as Silver Town and Las Vegas, alongside heavyweights like the ‘He 6’ and the ‘Trippers’, After that came another arrangement by Yu Chil-wang, the owner of C.W.Y. Productions – this time the destination was the U.S. mainland, San Francisco.

Since the Dolls’ arrival in North America up to the release of this album, strenuous effort was put in by the producer, Yu Chil-wang and Lee Dong-hoon, who acted as band master, song arranger, and overall musical instructor. The beginnings were not easy. One of their shows, set to take place at a prestigious hotel in San Francisco, was cancelled upon short notice. This led to producer Yu’s overall revamp of the existing repertoire, which was primarily derived from the scenes in the U.S. bases in Korea and Vietnam. Music director Lee (who had studied music in Seoul National University, and recently passed away in Toronto during the early 1990’s from a chronic illness) completely redid the old repertoire, introducing the latest contemporary numbers. He also beautifully reworked the song arrangements and acted as instructor to bring out each member’s best musical abilities. Within just three months of arriving in the U.S., the Dolls played an acclaimed show at the legendary Aladdin hotel in Las Vegas at May, 1974. Success in Vegas threw open the doors to any venue in the U.S. – even the whole of North America. They had hit the big times. A glance at the venues they played (listed on the back of the album cover) gives us an idea of the extent of their success. However, the band’s return to Korea in 1978 – their first vacation in 7 years – marked the beginning of the end for the Dolls. The financial difficulties of Kim Myung-ok’s family forced her to stay in Korea, thus ending the 8 year long run of the Dolls (and ironically launching the debut of Kim as the artist Nami).

photo: Sook, Karen Fownes, Jee, Joo and Boonie,, we were entertaining at the fountainblew Hilton in the Poodle lounge at this time in Orlando, Florida 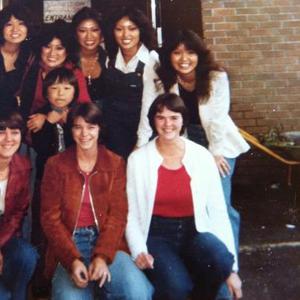 This was taken in Truro, Nova Scotia,, probably in 1978-79. with three friends from Dieppe, Ogie, who is famous in Korea now, is in this pic, just before she moved back to Korea 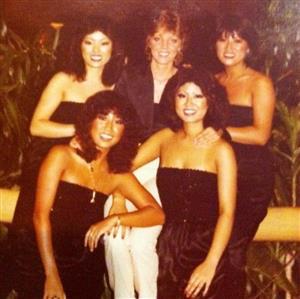