Russ, born December 23rd, 1918 at Arrow River, MB; died November 8, 2011. In 1939 Russ married Phyllis Hunter of Lenore, MB. Russ always loved the land and over the years they farmed at Lenore, Hamiota and Brandon, MB. From 1952 to 1958 he served as the Progressive Conservative organizer for rural Manitoba. While still farming, Russ' singing career continued to develop with regular performances on CKX TV and many years of touring rural Canada for the Federal Grain Corp. and Eli Lilly Co. His proudest moment as an entertainer came in 1970 when he performed for Queen Elizabeth II as part of Manitoba's centennial celebrations.

THE TWENTY THIRD DAY
On the 23rd day of December, I began
My long long journey in a big big land
I was born one day | By the town of Arrow River
Where the winds were cold | And made a little boy shiver
Where the Grand Trunk winding | Through the hills would blow
And her whistle would rattle | In the drifting snow

The world was wrapped in holly | With the tinsel on the trees
For a baby in a manger | Who would mean a lot to me
And on the twenty third day | Of December I began
My long long journey
In a big big land.

I remember when a cyclone | Tore the fences from the ground
But on Sunday we're back praying | In the church there in our town
And we sang the hymns together | With my parents I would stand
For that long long journey
In a big big land. 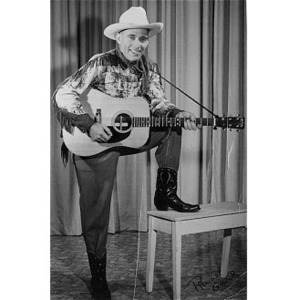