Dave Azzolini and Jessica Grassia are co-founders and the husband & wife duo leading the charge. Between 2005-2015 the GDs toured North America extensively, fueling the band's reputation for energetic, sweaty, power-pop shows. It's been a minute, but a little birdie told me they are working on a new album. Stay tuned.

It was a Saturday night, and only the best get to play Toronto’s legendary Horseshoe Tavern during North By Northeast, Canada’s biggest independent music festival. Most of the revelers were jammed in there to catch a glimpse of The Golden Dogs, and they were willing to wait nearly four hours to see them. At 1 a.m., the Toronto five-piece band hit the stage and the crowd erupted. Wild fist pumps, unrestrained screaming, erratic dancing – you couldn’t help but wonder what the hell was going on?

Contrary to a few people’s beliefs, The Golden Dogs’ devotees hadn’t gone insane – it was the band that was off their rockers. The Dogs launched into “Birdsong” and immediately set the place on fire. Lead singer and guitarist Dave Azzolini furiously attacked his axe, destroying strings in the process. His wife and keyboardist Jessica Grassia repeatedly smashed her keys with her fists while head banging to drummer Taylor Knox’s thunderous beats. Guitarist Neil Quin unleashed a bevy of blazing solos, and all the while bassist Stew Heyduk kept the rhythm in check.

The ‘shoe was buzzing - even a few inebriated frat kids at the back were shaking their asses, but things were just getting started. Dave’s face was dripping with sweat, Jess’ hair was sticking to her face and the audience was singing – no, screaming – along to almost every lyric. To cap this chaotic night off, the band played their incendiary cover of Paul McCartney’s “1985” and set closer “Yeah!”. During that song, as Jess pounded her keys over and over again, Dave disappeared. It was a little strange – had he had enough? Were things too out of control? The music kept going, though, and the crowd was still frenzied. Without warning the lanky lead singer stormed the stage, but he wasn’t wearing the blue blazer he started off with – he donned an outlandish, brown furry jacket that made him look like a starved Sasquatch.

For some that night, this would have been a pretty messed up show, but those familiar with The Golden Dogs know performing a high flying set is their calling card.

Fortunately, their manic energy isn’t limited to the stage. On their new record, Big Eye Little Eye, the band takes all that shambolic vigour and lays it down on disc. It’s impossible not to stomp your foot to the frantic opener, “Dynamo,” and it’s even harder to avoid shouting along to the choruses of first single “Never Meant Any Harm” and “Saints At The Gates,” a passionate track about playing live. If you’re not in the mood to air guitar, don’t worry, Big Eye Little Eye, which some critics are already calling the best disc of the year, has more to offer than just intensity. Intimate moments like the stripped down “Wheel Of Fortune,” the only song not recorded in the studio, puts listeners in Dave and Jess’ basement, while Theresa’s Beach Boys-style vocals is a touching tribute to one of the bands’ heroes, Brian Wilson. 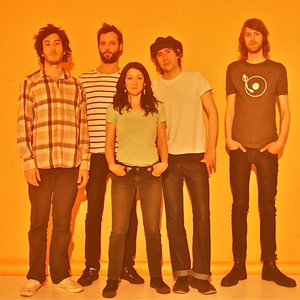