Joan Fairfax (b Pickup). Singer, accordionist, arranger, b Blackburn, Lancashire, England, 24 Jun 1926, naturalized US. She was taken at two to Oakville, Ont, but returned to England for a year at seven and there began piano study. She later studied accordion in Toronto with Dixie Dean. After Canadian tours with the Lifebuoy Follies and in a solo act for the armed forces and Red Cross, she trained as a coloratura soprano for two years at the RCMT. Subsequently coached by Art Hallman she sang briefly with Frank Bogart's dance band and 1951-2 with the Hallman orchestra. She made her radio debut in 1951 on CBC radio's 'Latin American Serenade'. A regular performer throughout the 1950s on CBC Toronto TV programs, notably 'Music Hall' 1953-5 and 'The Denny Vaughan Show' 1955-7, she also starred 1959-60 on 'The Joan Fairfax Show' before moving to the USA. There she appeared in 1961 on the Jack Parr, Ed Sullivan, and Lawrence Welk TV shows and toured 1963-4 with her all-girl orchestra as 'Canada's Blonde Bombshell, The New Ina Ray Hutton'. She settled in Florida, where she performed in hotels and at conventions, returning to Toronto for occasional TV appearances.

English singer, actress and accordionist, who moved in a early age to Canada. She was part of a band called Lifebuoy Follies in Canada. 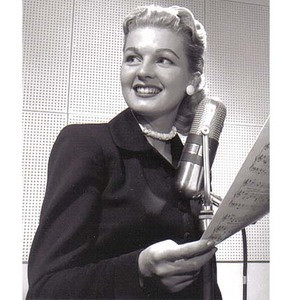