Hard Rock now, of an altogether more commercial bent from Québec's Dagger. Formed as Hell's Dagger in 1982, they shortened their name before contributing a track to the legendary, "Moose Molten Metal" compilation. This brought them to the attention of Attic Records who snapped them up and issued their only album "Not Afraid Of The Dark", through their Viper imprint in 1985. Despite their outrageous look, (click the cover to see it in all it's "glory"), Dagger were no Glam band, their sound was quite Anglophile, like an amalgam of UFO, Lone Star and Thin Lizzy, with a nice mid-'80's production job & BIG gang style choruses.

Not Afraid of the Dark 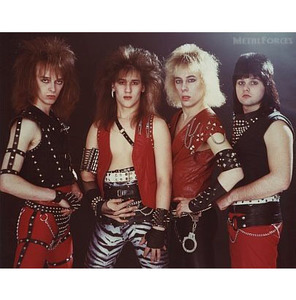