Boy Wonder Bobby Curtola
The title of “Canada’s First Teen Idol” doesn’t come easy, and it especially doesn’t come without a heaping helpin’ of luck. For Bobby Curtola however, natural singing ability, a silky-smooth voice, and boyish Italian good-looks made him an instant star amongst the teenage demographic.

Bobby was born in Port Arthur, Ontario (now Thunder Bay) on April 17th, 1943. He had a musical youth, enjoying all types of music he could get his hands on; especially Rock & Roll. At 15, wanting to emulate the stars of his youth, Bobby would begin singing. It didn’t take long for his natural talents to make themselves apparent.

Like many teens, Bobby craved freedom and would work various jobs while in high school to afford it. The final job he had was at sixteen, working pumping gas at his father’s garage, while performing at sock hops and other small-scale events with his group, Bobby and the Bobcats.

The incessant playing and frenzied reaction of fans caught the attention of label owners and song writing team, Dyer & Basil Hudson. They recently founded TARTAN and were looking for talent to sign to the label. TARTAN was mostly used for Bobby Curtola’s singles and albums, but over their 11 year run, the label also release 3 singles by a then 14 year old Lynda Layne in 1963-1964, two singles by Nova Scotia teen singer Honey Wells (later of the band Bradstreet), one killer Garage-Rock blast by Bobby Curtola’s backing band The Martells, and potentially more by other artists; no official discography has surfaced over the years.

After signing with TARTAN in early 1960, the Hudson brothers whisked him into the studio and had him record a number of tracks. Curtola recorded his first hit, “Hand in Hand With You,” in mid-1960. The buzz from that first single got him a gig opening for Bob Hope in Winnipeg. Shortly after this, the Hudson’s had arranged for Bobby to do a small tour of Western Canada. The tour was met with resounding praise and they sent Bobby to Nashville to record multiple songs, to help capitalize on the hype.

He soon found himself in RCA studios with recording legends such as Bill Porter, Chet Atkins, and the list goes on. The Hudson’s clearly spared no expense; having him record top quality material, with top quality musicians and producers. Their investment payed off! Hand In Hand With You, was followed by a slew of hits: “Don’t You Sweetheart Me,” “I’ll Never Be Alone Again, “Hitchhiker” and his main claim-to-fame, his million-seller “Fortune Teller.”

The next few months were like being caught in a whirlwind for Bobby. With the success of his recent hit singles, he was able to tour internationally, backed by the Martells. He toured with Dick Clark’s Cavalcade of Stars and travelled to England, where he appeared on Britain’s Thank Your Lucky Stars. His continued success led to more T.V. appearances for Bobby.

T.V. was something else he proved to have a knack for. His appearances on shows like American Bandstand helped him nab hosting jobs of his own back here in Canada. His charisma and beautiful voice were always front and centre. Whether it be hosting After Four, Shake, Miss Canada pageants, or even doing commercials and jingles for various products, Bobby always brought a professionalism and joy for the job that was unmatched and never forgotten by those that got to work with him.

As the 60’s wore on, Bobby had a continued run of hit singles on the Canadian charts. Overall, he released 25 gold singles, 12 gold albums and won the 1966 RPM Award, for Best Male Vocalist. Through this time he helped establish the blueprint for nation-wide touring in Canada (at least for Pop stars, Jazz artists may have got to it first), and became one of the first performers in Canada to found his own publishing, recording and concert promotion companies.

After a near perfect run of the 60’s, the 70’s saw Curtola switch gears. In the Frank Sinatra vein of teen heart throb gone casino entertainer, he reinvented himself in the crooner mold. He put out a lone album for the Canadian Talent Library in 1972. This album and new style proved instrumental in landing him a multi-million dollar deal with the Howard Hughes Hotel chain; a place where he’d work happily for over 20 years.

Although our industry wasn’t perfect at the time, Bobby made the most of it and got lucky along the way. His importance as an industry pioneer cannot be understated. He lit the way for many young performers like himself.
-Aaron Lusch
AaronLusch@hotmail.com

A Love Story in Stereo

A Love Story in Stereo

Indian Giver b/w Hand In Hand With You

Aladdin b/w I Don't Want To Go On Without You

Gotta Give Love (Way Down Deep) b/w My Xmas Tree

Jean b/w I Wouldn't Have Missed It For The World

Move Over b/w They Say

Walkin' With My Angel b/w Midnight

While I'm Away b/w Not Till Now

You're Not A Goody Goody b/w Far Away Heart

It's About Time b/w Paper Heart

Forget Her b/w If All Goes Well

My Heart's Tongue Tied b/w Don't You Sweetheart Me

Alone and Lonely b/w You'll Be Falling In Love Someday 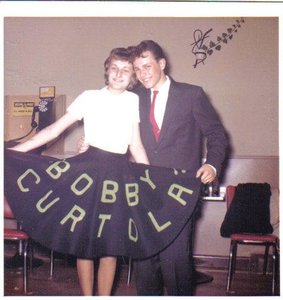