From the viewpoint of Neal Busby (drummer)

Sometime in the year 1982 I was just out of high school, started my first year of college, had a brand new double bass set of Slingerland drums and was itching to find a band. Finding a band was the true priority, and I was scouring the music stores to find any leads on bands or musicians looking to do the kind of music I was into at the time, fueled by the sound coming out of England “The New Wave Of British Heavy Metal”. Eventually I was contacted by a bass player who was with a couple of guitar players who wanted to do a lot of Judas Priest and Iron Maiden, and they wanted to check me out. One of these guitar players was Glen Cunningham with whom I would later play with in Chyld.

After many rehearsals and attempts to find a singer, this band, which never had a name, called it a day. I continued my college studies and continued to drive my parents insane with non-stop double bass hammering coming from their basement. At some point, Glen called me and said he found a singer and wanted to bring him over to meet me. This was how Rob Villemaire came into the picture. I believe we started by playing songs in my basement with just the three of us to see how it would go. Things clicked, and to spare my parents any more headaches we set our sights on what was then one of Toronto’s biggest rehearsal studios: Safor.

Safor was an amazing place back in the 80’s it had hundreds of rooms. All the “big” bands that played the clubs rehearsed there. Bands like “Anvil”, “Rapid Tears”, “Kid Wikked” (featuring a very young Sebastian Bach later to be in Skid Row), and one of Toronto’s biggest club draws “Harlott”. As we settled in to practicing we became friends with Harlotts bass player, the ubiquitous Pete Dove. We had heard rumblings of dissention in Pete's band and were actually happy when he parted ways with them and simply hauled his gear down the hallway and moved into our room. That is when Chyld truly was born, and the work began.

We did do a lot of cover songs, but right away we had many originals written. With the completed band together, a diligent rehearsal schedule was laid out and adhered to. Having a place to play drums and be with a band was not going to go to waste as far as I was concerned. Much later I was to discover that all the great bands that I looked up to also had that same work ethic. So, we rehearsed 4 or 5 times per week. This, to me, was normal as I knew no different. No other band I was in later ever worked this hard. This is probably why I am writing about Chyld today and not them!

Rehearsing was fun work, but soon we knew we had to do some gigs to get to the next level. Pete set up our first gig, opening up for a Judas Priest cover band called “Izod”. This was to be not only Chyld’s first gig, but the first time I had ever played on stage! I don’t remember much about the gig, but I think this is where my bass drum beaters were “loosened” and fell off my pedals while I was playing. Sabotage? Rob always seemed to think so, but as it was my first gig, negligence on my part is more likely!

The original bass player that we had was a guy called Neil Wilson; don’t know what happened to him, but with my ego there could only be one Neal in the band! However he did try and get us our first gig at the infamous “Larry’s Hideaway”, which is the club where we did do our first gig with Izod. “Larry’s” was the only venue we ever played and was legendary for being one of the seediest dives during the day and having one of the loudest sound systems in Toronto for bands at night. We did a handful of gigs there on our own and once opened for “Anvil”.

The Anvil gig was weird. I was so looking forward to seeing them and watching Rob Reiner (drummer), but was very disappointed when a small percentage of their audience were, shall we say, rude to us. I do recall we got heckled by one guy in particular and I lost it and yelled something back, then my older brother Dean proceeded to “escort” the offender out the front door…never to be seen again! Needless to say after that all was quiet from the Anvil fans and we finished the gig. Wait a minute, this might have been the “bass drum beaters” night! Oh well, I’ve played a lot of gigs since then, they all blur together after a while!

Every band has it's share of drama, and Chyld was no different. Differences of opinion led to the band splitting up for about a little less than a year. What the squabbles were about is meaningless as are most inner band conflicts, and eventually we all began communicating again. Chyld stage two happened sometime in 1985. Pete returned from a stint with a Van Halen tribute band in Winnepeg and we once again returned to Safor with the original line back in full swing.

With renewed vigor we started up our usual rehearsal schedule and began working on more new songs. There were a scattered few shows at Larry’s but I began to think that it was time to do something different. We needed a demo!

It was my decision to record and I made all the arrangements for the studio and the resulting pressing of the single. The recording was done at Toronto’s TRW studios aka Toronto Recording Workshop. The engineer was a guy called Shane Lunny. He was a very funny guy who kept the session light and fun. We banged out the bed tracks very quickly. Lite The Nite was three takes, Tell Me A Lie was one, and Ye Morlok took two runs through. We were well rehearsed and ready to rock. The whole session was ten hours and this included mixing! This was my first experience in the recording studio and I loved it! The next step proved to be a very important one…we made the 7inch single!

I recall the day I picked up the single from a company called World Records a “vanity” located in Bolton, Ontario. First there was a problem, the original idea to have Tell Me A Lie as the b-side was scrapped because of a technical problem with the master. It ended up with Lite The Nite on the A side and Ye Morlok on the B side. I was excited to see the product but was a little disappointed when I saw the white sleeve and generic white record centre! I had visions of something more, but you get what you pay for. They also messed up the song credits and the “fake” label name of “chyldysh” records. But it didn’t matter, we now had a piece of history in our hands, not just a demo tape but a real record.

Unfortunately none of us really knew what to do with our demo and record. We had no experience with promotion and the business was full of charlatans ready to take your money for a “non-exclusive” management contract. The only thing we did was enter a local radio stations “Homegrown” talent contest. Q107 in Toronto used to put the contest on once a year and we did do quite well finishing in the top 25! Even the shows we played after the single was released did not yield any great interest or sales, much to my disappointment. Pete being the only one in the band with any connections due to his previous bands got us into a metal magazine called “Metallian” which was put out by a guy called Drew Masters. A few blurbs were written but it wasn’t enough. These were the days way before the internet, so with no record label or management to guide us, we really started to not see any progress and frustration set in.

Honestly I don’t remember when, how or exactly why the band fell apart. If we had gotten some good management we may have gone on longer. Unfortunately life sometimes gets in the way, and without much going on, everybody seemed to get busy working jobs and preparing for the future. I was lucky being the only one who lived at home and did not feel the pressures like the other guys. So I guess you could stay it just kind of “fizzled” out. The records were still in boxes and for years I actually used them as a sort of makeshift desk by my window. There they sat for many years and with the band gone, I eventually moved them to the basement. The CD takeover as the new medium for music turned my records into kind of a joke at the time. I guess I had the last laugh, CD's are now history and vinyl is now quietly making a resurgence in the digital age!

Glen or Pete told me that at one point someone from a American magazine had been looking for us as they had heard about us through the grapevine. Another missed opportunity? We’ll never know! Back in 2002 a guy who was writing a book about the Toronto metal scene contacted me and requested a few copies of the single. I sent him a quantity (I still had hundreds stored in Mum’s basement!) and that was the last I heard from him. Maybe this was how the single got to be circulated in the metal underground, as we sold very few copies. It was a great shock to me to find out that people were selling them for upwards of $300.00 a piece on various websites. This is how I came to start selling them myself and could not believe the response! Completely unknown to all of us the band had achieved some really good status in the European metal community. People were ordering dozens of copies of the single! This is how I met up with Kostas and Thanos and we began to formulate an idea…one that was 25 years in the making!

That result of that idea is now hopefully sitting on your old school turntable blasting out some vintage Canadian power metal! The record finally got the package that it deserved and has been properly released to the world. I can’t thank Kostas and Thanos, and everyone else involved in making this possible, enough. This is a piece of Canadian music history that will not be duplicated; these are the original records that came off the line back in 1986. So sit back, close your eyes and let it rip!

Recently, as I reflected back upon those days, it reminded me of the fact that Chyld was the only band I was ever in that was 100% about the music. Every band I was in after that was mostly about meaningless partying with meaningless music to match. Every minute we spent working on our craft has been reflected in the staying power of the small amount of music we made. The message that I hope comes out of the release of these songs is that hard work pays off, it just sometimes can take a little bit longer. 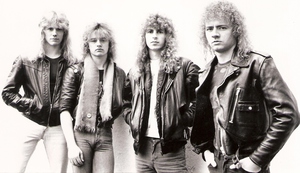 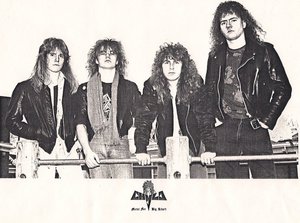 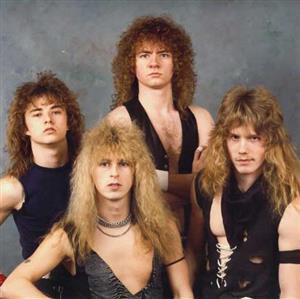