Rita Chiarelli performs original material, blues and R&B tunes, Italian folk songs, or Elvis Presley covers. Her voice and three octave range garner initial attention, but Rita's songwriting has substantially contributed to her four JUNO nominations. Her songs shimmer with blues-based rock undertones, jazz riffs, Cajun, and country-tinged melodies, blended with a folk-roots flavour. An accomplished entertainer who quickly develops a rapport with her audience, Rita has been performing since the age of fifteen. She toured with Ronnie Hawkins, then, after spending most of the 1980s performing in Italy, Chiarelli returned to Canada where her independent single "Have you Seen my Shoes" was included in the soundtrack of Bruce McDonald's 1989 film Roadkill, now a cult classic. Along with touring extensively in Canada, the USA and Europe throughout the 1990s, Rita released four albums, and earned a JUNO nomination for Best Blues Album. A 2004 release, a tribute to the blues which pays homage to some of the great blues masters whose music has influenced her over the years, earned her another JUNO nomination. During the past decade, Rita has toured continuously, playing festivals and concert halls throughout North America and Europe. She has earned numerous Maple Blues Awards and nominations. In 2002, Rita was honoured by Canadian fans, receiving CBC radio's annual "Great Canadian Blues Award". Rita's most recent release is a dramatic departure from her usual repertoire, although her recording of old Italian folk songs has an emotional impact on even those who don't understand Italian. An upcoming CD of original songs is anticipated in spring 2007.

Born in Hamilton, Chiarelli's singing/songwriting/guitar playing began while still a student in high school. Following graduation she and her band, Battleaxe, toured the club circuit in Canada and the US which led to her to the attention of Ronnie Hawkins while playing at his club.

A year later she left Battleaxe to join Ronnie Hawkins and The Hawks. She soon found the gig and the Canadian music arena for hard rocking female singing blues guitarists restrictive to her career so she quit and moved to Italy where the musical climate was more conducive to her brand of rock and roll. After writing a substantial amount of material, she returned to Canada five years later and released the independent single "Have You Seen My Shoes?" and landing a Toronto Music Award in 1987 for 'Artist Most Deserving Of A Record Contract'.

In 1988 she received another Toronto Music Award for 'Toronto's Rising Star' and soon came to the attention of movie director Bruce McDonald and a spot on the soundtrack to his movie 'Roadkill' (and later on 'Highway 61').

1991 proved fruitful as she took first place in Q107's annual 'Homegrown' contest with the song "Love Overload" and first prize in the Molson Canadian Rocks Showdown as 'Canada's No.1 Homegrown Artist'. She formed the band the Road Rockets and launched her debut album, also called 'Road Rockets', on Stony Plain in 1992.

Chiarelli has also been featured in the 'Celebration Of Blues' compilation series.

Rita Chiarelli may very well be the most powerful singer in Canada! Bringing her brand of rock and blues to an ever-increasing loyal audience since she was 15 years old, Rita finished high school in Hamilton Ontario and formed the band Battleaxe, a nine piece R&B band which toured Canada and the US. She then joined the Ronnie Hawkins school of rock and roll for a year and in 1981 left Canada on a trip to Italy, staying six years, touring and working in studios.

Back in Canada in the late 1980s she released a succession of independent singles and had one of her most powerful songs, "Have You Seen My Shoes?", used on the soundtrack of Bruce McDonald's Canadian-made movie Roadkill, now a cult favourite.

The success of the first Stony Plain album Road Rockets helped cement Chiarelli's solid reputation on the club circuit as an exciting, powerhouse performer with a stunning 3 octave range and a no-holds-barred delivery that rocked audiences across North America and Europe. Her second album was co-produced with John Switzer, best known for his work with Jane Siberry, and featured guest appearances by Juno Award-winning guitarist and songwriter Colin Linden and members of country rock band Prairie Oyster. All songs with the exception of the Elvis Presley hit "Love Me" were written by Rita, who has developed her songwriting skills to the point that other artists are paying attention; Long John Baldry recorded Rita's song "Midnight in Berlin" on his album Right To Sing The Blues.

There are not many female singers in Canada who can handle the blues and it's close cousin, powerhouse rock and roll, with Rita Chiarelli's understanding, authority and sheer attitude. If you need a little demonstration, check out the incredible Breakfast at Midnight. Not only will you hear "a voice so blue that it makes the angels cry" (Ronnie Hawkins), you will bear witness to Rita's wealth of talent as a storyteller and songwriter.

Born and raised in Hamilton, Ontario, Chiarelli began performing in Ronnie Hawkins' band in the early 1980s. She subsequently spent several years in Italy. When she returned to Canada, she quickly attracted the attention of film director Bruce McDonald, who included her "Have You Seen My Shoes?" on the soundtrack to his 1989 film Roadkill. Chiarelli and Colin Linden subsequently recorded a cover of Bob Dylan's "Highway 61 Revisited" for McDonald's 1991 film Highway 61, and Chiarelli released her debut album the following year on Stony Plain Records.

Her albums Just Getting Started and Breakfast at Midnight were both nominated for the Juno Award for Best Blues Album.

What A Night - Live

No One To Blame 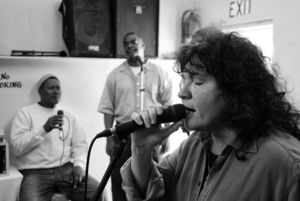