Cannon Heath Down was an indie band from Vancouver, BC. They had one album, "Heart-throb Companion" released on Bongo Records in 1987.

The Cannon Heath Down FAQ
Is it true that all of Cannon Heath Down lived in the same house?
Yes, for most of the time CHD was in existence, we all lived in a single house in East Vancouver. Jon, Frank, and Cam lived upstairs, with Jeff and his wife Jacquie (and later their first daughter) living downstairs. There were also several cats.

Is it true that the band, when it was just Jeff, Cam, and some other guy (Rod) was called "The 5th of November", and that Jon, whose birthday actually is November 5, joined later?
Yes.

Is it true that CHD found Jon by advertising for a drummer?
Yes, Jon (who of course already played guitar and sang and wrote great songs) answered the ad and did a bit of drumming, but eventually we taught Frank how to play drums instead, and put Jon where he belonged.

So you weren't actually all in the womb at the same time?
No, not quite. But we tried.

Did you really try?
No. Jon and Cam, being the first ones conceived, were completely unable to exert any influence on the parents of Jeff and Frank, as they (Jon and Cam) were still in the womb.

Is it true that the band name changed from "The 5th of November" to "Bayou Drachma", and that the members adopted French names?
Yes. Pierre, Henri, Guy, and Luc. (Or, as we sometimes used to say, "Pierre, Henri, Guy, et Luc".) All with the last name Lafleur.
Jeff was Pierre, Frank was Henri, Cam was Guy, and Jon was Luc?
Yes.

Is it true that the name "Cannon Heath Down" came from the book Watership Down, but that none of you had read the book when you picked the name?
I think so, yeah.

What are some of the bands CHD opened for?
Grapes of Wrath, 54•40, Game Theory, The Water Walk.

The Water Walk?
Yes. Dale Darlington, Dave Kershaw, Ike Eidsness, and later Lynne Kellman. Go to the Nettwerk store, listen to some samples (start with "What the Moon Saw"), and then buy their record "Thingamajig". 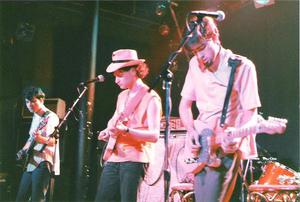 Cannon Heath Down at The Town Pump 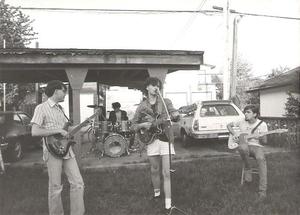