Alfred Allen Erwin received his schooling in Ernewien School, Saskatchewan. The Ernewein School District was named after his father. In those days he was known as Mike Ernewein. Allen Erwin was a singing cowboy, who performed in 50+ cowboy movies in the 1940's. In 1946 he had a character role in David O. Selznick's $5,000,000 Technicolor film "Duel in the Sun". He portrayed a Corporal in the US Cavalry, in the conflict sequences. He went to Hollywood in 1933 and made his radio debut in Edmonton ca 1931 singing many songs he had written.

In June 28, 1947 he was working for Monogram Pictures. He flew east to Philadelphia, and while there he met Jack Howard and James E. Meyers, of Cowboy Record Company. He did a guest radio shot on Sleepy Hollow Ranch Gang's program, on WFIL Radio. They recorded on the Cowboys Record label. In addition he made an appearance at the actual Sleepy Hollow Ranch in the Delaware Valley, near Quakertown PA before returning to the west coast. It had animals and live Country Music. He worked for Pat Burns, the "Cattle King" of Alberta.

He earned his nickname "Calgary King" at the Calgary Stampede. He worked for Colonel Jim Eskew, a rodeo producer, who organized a Wild West show at the time. Gene Autry, Hoot Gibson and the Calgary Kid, were some of the stars he used to entertain rodeo crowds. Gene Autry encouraged him to become a Professional Singing Cowboy. He liked the way he played his guitar and complimented him on his singing.

Allen worked as a cowboy in the State of Arizona, John Day Cattle Country in Grant County, Oregon, also in Colorado, California, and New Mexico besides early on in Western Canada. His favourite cowboy job was working for Tom Bell, a Texas cowboy, who was trapping and running wild horses in the State of Nevada.

Tenderfoots Warning // Why Have You Gone & Broken My Heart

My Indiana Moon // I'm Going Back To Peaceful Valley

Old Kentucky Moon // Out On The Western Range

Did I Hurt You Darlin' // Don't Tell The Neighbours

The Cowboy's Lament // Way Out Yonder 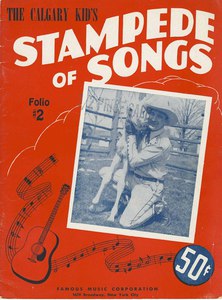 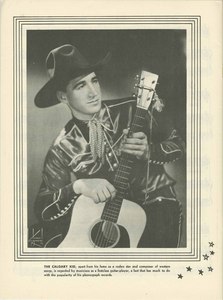 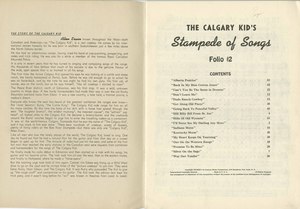 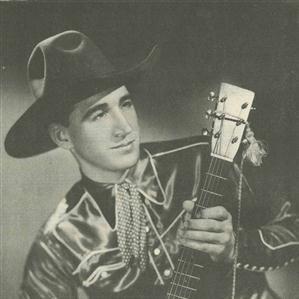