Together, these gentlemen recorded one album. It was the first album recorded in any of the Atlantic Provinces and the first all-original material by any Newfoundland group.

Borealis also released an equally rare 45 released at the same time featuring “In the End b/w Busniess” on Audat. “In the End" made it to the top ten in St. John’s for a few months.

A few of the highlights of the band's careeer included performing as the opening act for famous Canadian rock bands 'Lighthouse' and 'Crowbar', at an outdoor concert at Spence's Speed Bowl in the Goulds. They also shared the stage with 'Abraham's Children' and were the opening act for the Poppy family, both at the Arts and Culture in St. John's, Newfoundland.

The band disbanded in 1974. In 1977, Mark Bradbury, Wayne Sturge, and Dave Hillier, together with Bob “Lumpy” Brown formed a band called “Buster”. They made no recordings and they disbanded a year later.

Dave Hillier played played with a band called 'Border Line' in 1979, along with Bob Dike, Dwight Tilley, and Reg House

Paul Bradbury has also played with The Ravens, Deltones, Lincolns, Du-Cats, Professor Fuddle's Fantastic Fairy Tale Machine. Paul Bradbury has his own website with some great photos. You can visit his website here: http://www.paulbradbury.ca.

Wayne Sturge later played with Buster and Scott Rowsell and Aquarius. Wayne Sturge has been collecting music memorabilia relating to the early Newfoundland Rock & Roll scene for many years. That work led to the release of a CD/DVD entitled “Rock & Roll Comes to Newfoundland & Labrador: An Archive by Greg Dodd and Wayne Sturge. The book is an excellent resource for aficionados of rock and Newfoundland history buffs. You can order your copy here: http://www.nlrocknrollarchive.com/rnrProject/RRHistoryIndex.html

with some notes taken from 'Rock & Roll Comes to Newfoundland & Labrador, by Greg Dodd and Wayne Sturge 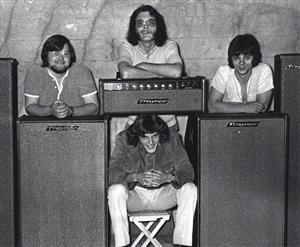