Edward Isaac Bickert, CM, jazz guitarist (born 29 November 1932 in Hochfeld, MB; died 28 February 2019 in Toronto, ON). Ed Bickert was Canada’s best-known jazz guitarist. He developed a unique, understated style of considerable harmonic sophistication. Rooted in bebop, his intuitive, pianistic approach was characterized by lyrical and rhythmic ease, a deceptively complex simplicity and a generally muted tone. He is noted for his work with Ron Collier, Rob McConnell, Don Thompson and Moe Koffman. Bickert achieved international prominence through his work in the mid-1970s with American saxophonist Paul Desmond. A Member of the Order of Canada, Bickert won a Juno Award and multiple National Jazz Awards. He also played on dozens of Juno- and Grammy-nominated and award-winning recordings.

Early Years and Career
Raised in a farming and ranching family in Vernon, BC, Bickert began teaching himself the guitar at age eight. He first played with his father, an old-time fiddler, and his mother, a pianist, in a country dance band. In 1952, he moved to Toronto and worked until 1955 as a radio engineer on CFRB radio. At nights, he played at such after-hours jazz clubs as the House of Hambourg. His few lessons with renowned guitar teacher Tony Bradan were his only formal training.

Career Highlights
In the 1950s, Bickert was a member of Norman Symonds’s jazz octet. He also played with Ron Collier (1954–66) and with Phil Nimmons (1957–70). He played in most of Moe Koffman’s successive jazz groups beginning in 1956, and in the Boss Brass beginning in 1968. He also did a great deal of studio work in Toronto until the early 1970s, and performed intermittently with the groups of Peter Appleyard and Hagood Hardy, among others. He also appeared in duos with Don Thompson and Boss Brass bandleader Rob McConnell.

Formed in 1974, Bickert’s own trio — with Thompson (bass) and Terry Clarke (drums) — played widely throughout Canada in clubs, at festivals and on CBC Radio. In 1979, the trio played the Bracknell, Northsea and Montreux jazz festivals during a European tour sponsored by Radio Canada International. (See also Music at the CBC.) During the 1970s and early 1980s, Bickert (with Thompson, Clarke and others) accompanied many American jazz stars at the Toronto club Bourbon Street, including Paul Desmond, Chet Baker, Red Norvo, Milt Jackson and Frank Rosolino.

Bickert’s work with Desmond from 1974 to 1976 first brought him international attention. In 1979, he toured with Jackson in Japan. During the 1980s, Bickert appeared on international stages with Koffman, Appleyard and the Boss Brass, and at several festivals in Concord, California. He signed with the Concord Jazz label in 1983 and recorded numerous albums, including several as a sideman for such artists as Rosemary Clooney and Benny Carter. In 1987, he returned to Japan with the Concord All Stars. In Toronto during the 1980s, Bickert also performed and recorded in a quartet with tenor saxophonist Rick Wilkins or guitarist Lorne Lofsky and various bassists and drummers.

After injuring both of his arms in a fall in the mid-1990s, Bickert took time off to recover before returning to playing and touring. He contributed to Mike Murley’s Juno Award-winning albums Murley, Bickert & Wallace: Live at the Senator (2000) and Test of Time (2012; recorded in 1999). Bickert and his Fender Telecaster retired in 2002.

Teaching and Influence
Bickert taught briefly at the Advanced School of Contemporary Music in Toronto during the early 1960s, at the Banff Centre for the Arts in 1978–80, and at the University of New Brunswick Chamber Music and Jazz Festival in 1978 and 1982. He was a formative influence on a generation of Toronto jazz guitarists that includes Lorne Lofsky, Roy Patterson, Rob Piltch, Reg Schwager and Geoff Young.

Bickert had the talent and ability of a superstar but conducted his career with a degree of humility and reticence that belied both his accomplishments and his international reputation. (He once said, “I was born to be a side man.”) Chuck Berg, writing in Down Beat magazine, praised Bickert for “an understated eloquence matched only by such masters as Jim Hall.” The Globe and Mail’s Jack Batten heralded Bickert’s ability to “combine in his solos the logic of a mathematician and the grace of an angel.” Bassist Steve Wallace lauded the “intense focus and swing of his playing, his beautiful, clear tone, pithy and graceful solos, great feeling for the blues and his deadly sense of chord voicing.”

Out of the Past 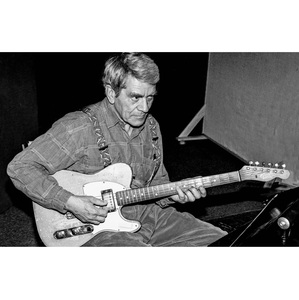