Dave Baker was born in Vancouver in 1945. His childhood days were in Nanaimo and his adolescence in Duncan. While in Nanaimo he lived on St Andrews Street next to the E&N tracks. It was at that time Dave became very interested in trains which has since lasted a lifetime.

Dave moved from Nanaimo to Duncan in 1957 and lived on Maple Bay Road. It was there he got involved in music. In 1960 Dave formed a rock'n roll band and for three years his band played at highschools and community halls all up and down Vancouver Island.

In 1963 Dave graduated from Cowichan High and then enrolled at UBC taking mechanical engineering. Throughout those years he did did very little in music but did perform at sing-a-longs. Upon graduating from UBC, in 1969 Dave moved to Montreal to start his new job. It was then he joined the Montreal Workshop and began singing and song writing his songs. In April of 1971, Dave married Marlene and in the fall they both went to Port Alberni where Dave worked in the pulp and paper mill and they began starting a family. In 1972 Dave formed a group of Port Alberni musicians and began recording his songs at Jim Rutherford's home studio.

In 1973 Dave went to a recording studio, Studio 3, in Vancouver with his songs and played them for Studio manager Ralph Harding. Ralph liked his songs and assigned studio producer Jake Doell to record an album entitled Kettle Valley Line Two singles from album were Now and Then and Walk that Endless Highway. Both singles got action on Canadian Country charts.

There was a management change at Studio 3 and Dave planned another album which was to be produced by Martin Shaer. The album was called Endless Highway. The single Emily Carr World of Small did well but the rest of the album didn't get much attention.

In 1993 Dave met an old acquaintance in music Ed Molyski at a Vancouver music conference. Together they planned a new CD which included Dave's new songs and some of the old songs rerecorded. The CD was called This Land is What I Am. It was released in 1995. Reception was cool but many remarked favourably about his railroad songs.

Recognizing their interest, Dave did a concept CD featuring his own railway songs and covers of other railroad songs by Gordon Lightfoot, Ray Griff, and Jimmy Rankin. Dave called the CD Songs and Sounds of Canadian Steam. Besides the songs the CD has steam locomotive whistles on some of the tracks

At the time of release (1998) Dave suffered a stroke so everything was put on hold.

In 2001 Dave ran expensive ads in Trains Magazine Kalmbach Wisconsin. His friends thought he was making a big error. He was creating mailorder service. The results were very amazing. For Dave's investment paid off in spades over a 3 year period.

But Dave's biggest achievement was yet to come.

Vancouver composer/arranger Dr Larry Nickel was commissioned by internationally known men's choir Chor Leoni to find folk songs from every Province in Canada. The chosen songs would be included in their 2005 Bard on the Beach concerts and then on the CD Canadian Safari 2.

Dr. Nickel could only find one B.C. song, Williams Lake Stampede, by veteran B.C. singer/songwriter Alan Moberg suitable for the project. Dr. Nickel asked Alan if he knew of other songs from B.C. that might be suitable. Alan recommended that Dr. Nickel contact Dave.

The results have been astounding for Royal Hudson primarily because of Dr. Nickel's brilliant arrangement. The song has now been performed by over 150 choirs in Canada, the U.S., Britain, Australia, and New Zealand. Other songs that have also done well are Dave's fishing song Old Lady Rose and his song about Vancouver Island This Land is What I Am.

Dave feels that one of his best achievements was having 20 Ontario choirs perform his work.

Dave's career in music is winding down now. His railroad songs Royal Hudson and Kettle Valley Line are considered Canadian cult classics. Dave is now recognized as a composer of Canadian folk songs.

His work will live on for decades to come. 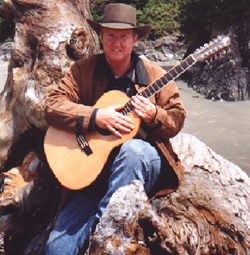