Aura, a jazz singer who has performed with some of the world’s top artists, marks her first performance in Barrie since she moved here last summer. This weekend’s concert will also be her first since the death of her husband, a famous drummer, earlier this year. She has a voice that captured the attention of some of the world’s greatest jazz artists — from Duke Ellington to Ella Fitzgerald, Quincy Jones and Sarah Vaughn — yet she stopped touring in 2010 because of her husband Ron Rully’s illness.

His health was also why the couple moved to Barrie last summer, seeking a quieter environment than Toronto where they had lived for the past 35 years. In his lifetime, Rully performed with many of the big bands, was a member of the Moe Koffman Quartet, recorded with numerous artists from Oscar Peterson to Anne Murray, and also had his own group. The couple, married for more than 43 years, has Duke Ellington in common, although they performed with him at separate times in their careers. “My husband played with Duke before, when he didn’t know me,” said Aura, recalling a particular performance at Carnegie Hall when Ellington singled Rully out during a concert. “I was singing with Duke and his orchestra when Duke says to the audience, ‘I’d like to introduce you to Canada’s number one drummer.' He (Ron) was in the audience.

Look for her to revisit that time in her life with a retrospective of Duke Ellington’s music at the Barrie Jazz & Blues Festival in June. For the Barrie concert, Sunday, she will be appearing with longtime friend James Rohr, on guitar. He has also been the sound engineer on her records. “There's going to be a little bit of jazz. I’m going to do some lovely songs, a little bit pop-ish, serious songs, with beautiful words,” said Aura. “It'll be a very pleasant afternoon, I can promise you that.

She was born in Bucharest, Romania, and grew up surrounded by classical music. Her father was concert master with the symphony orchestra and her brother, four years younger, followed in his footsteps to become a professional violin player. Aura’s vocal talent emerged very early and she sang from the times she was a little girl. She was a natural and a fast learner even though she didn’t take any formal lessons until her late teens. While she likes all kinds of music, jazz is her favourite. She was just over 13 years old when she recorded a big-band song.

She started scatting before she even knew what it was. She was just bored with the lyrics. She found out what scatting was when she heard Ella Fitzgerald do it. It was CBC that brought her to Winnipeg in October 1969. Her first appearance was as a guest on the Ray St. Germain Show. Sell-out performances at Club Morocco, the only jazz club in Winnipeg, followed. It was where Ellington spotted her, taking some time out from a concert he did there to drop by the club. After jamming together the next day, he sent her a ticket to New York and she performed with him full-time in the U.S. until his death two years later, in 1974. Over the course of her career, Aura has recorded four of her own CDs. She also composes her own music.
-Susan Doolan, The Barrie Examiner

Once I Loved (Am Iubit Odată)

Once I Loved (Am Iubit Odată) 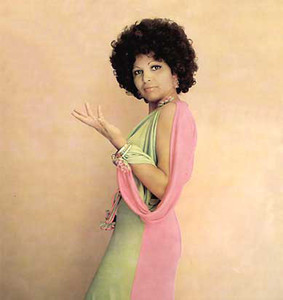