In the 1980s, when Ms. Anthony Linden was vice-president of network relations at CTV, the sign on her door read "Vice Princess." According to Newsworthy: The Lives of Media Women, by Susan Crean, the sign was put up by friendly staffers in order to "soften the blow," the blow being that she was a woman with power.

In Ms. Crean's book, Ms. Anthony Linden confesses she was glad when male colleagues finally stopped standing up in deference as she entered a boardroom, where she was the only woman. She was now their equal.

Delegated by CTV to serve on a CRTC task force about sex-role stereotyping, she found the process baffling and annoying. "The other committee members got very angry because I didn't identify men as the oppressors, and I didn't see everything as a struggle for women. For me, it is a matter of commitment and maybe women do have to work a little harder to prove themselves. I have seen a lot of women who have done it and succeeded."

The book also notes that affirmative action was not part of Ms. Anthony Linden's lexicon; she was a firm believer in hiring for talent and promoting on ability. "You can't say that because there are only two women doing a particular job that we ought to get another one. I don't think that way."

Peter Rehak, executive producer of W5 during Ms. Anthony Linden's tenure at CTV, recalls a woman both flamboyant and stylish who brought a touch of glamour to the network's executive ranks: "For me, she was the 'go-to' person on the executive floor when there were public relations or even legal problems to deal with. She wielded influence much beyond her title of vice-president, and her support for the news division was crucial."

"People were attracted to her," said her husband, Allen Linden, a retired judge of the Federal Court of Appeal. "She had that ability to look in people's eyes and make them believe she cared – and she did."

The girl who would go on to have a long and illustrious career in entertainment and broadcasting came from the small town of Mill Village, N.S. Born Oct. 10, 1935, she was the second youngest of eight children. Her mother, Barbara, died following gallbladder surgery when Marjorie was just three. Her father, Roy Anthony, a plumber and jack-of-all trades, struggled to feed his large family. Her elder sister, Barbara, as well as a succession of housekeepers, helped to raise Marjorie. Despite her tough beginning, her life later read like a self-made Cinderella story.

Barbara says her little sister was always a bright girl who, even from an early age, exhibited star quality, not entirely surprisingly, since both her parents were musical. At 13, she sang and tap-danced for a Bridgewater, N.S., radio station. She seemed to have a gift for remaining calm under pressure. Barbara remembers one Christmas concert in which the decorated tree on stage fell in the middle of Marjorie's performance. She kept on singing as though nothing had happened.

Marjorie originally thought she might become a nurse, but she abandoned the idea for a more alluring job as a script assistant, commentator and singer for CBC-TV in Halifax.
At 24, she sought the brighter lights of Montreal, where she could pursue her natural inclination toward music and entertainment. She performed as a nightclub singer at the Ritz Carlton Hotel. Sounding similar to actress/singer Doris Day, she even produced and recorded an album, Marge Anthony Sings.

It wasn't long, however, before she was back on air. She joined CKGM radio as a commercial writer before taking over all-night duties as a disc jockey, another first. She then returned to television as a commentator and weather reporter at CFCF in Montreal.

Seeking opportunities in bigger markets, she moved to Houston, as a producer at an NBC affiliate. Two notable specials Ms. Anthony shepherded to completion were Furnishings of the White House and A Texan Visits the White House, with Lady Bird Johnson.

For an ambitious, fearless young woman with production experience, Hollywood was the ultimate lure. In the 1960s she landed the position of VP of Artist Relations at a company that handled the comedy duo the Smothers Brothers. When CBS cancelled The Smothers Brothers Comedy Hour in 1969 owing to the brothers' taste for material that was critical of the political mainstream, such as their skepticism about the Vietnam War, Ms. Anthony moved to a division of CBS Records in New York.

For the next two years she worked on the production of albums for many famous artists, including Kenny Rogers, Barry Manilow, Melissa Manchester and Nana Mouskouri. During this period she also oversaw a world tour, two television productions and two records – including Hot August Night, a live double album – for singer Neil Diamond. Back in California, she reconnected with the Smothers Brothers, becoming their personal manager.

Both brothers spoke of her warmly.

In a telephone interview with The Globe and Mail, Tom Smothers said: "Both Dick and I adored her. We felt very comfortable and very confident with her as our manager and there weren't many personal managers who were women at the time. Her advice was always good. She was very solid. There was a time when the Smothers Brothers were considered difficult and she kind of smoothed it out for us. You don't get to hug your personal manager very often and I got a lot of good hugs from her."

Dick Smothers added, in a separate telephone interview: "Marge was an amazingly warm and intelligent human being. She had a great mothering instinct [laughing] that temperamental artists need. She loved travelling with us. She seemed to be on a diet most of the time, so, in nice restaurants, we'd arrange for the waiter to bring her rich, gooey desserts. She'd laugh and push them away but we'd talk her into having a few bites. She was fun to be around. I think she liked me best but Tom thought she liked him best. That's how good she was."

In 1978, Marjorie returned to Canada and CTV, where she worked on building campaigns around shows, including publicity and communications for the Calgary Olympics. For her work on the network's six-part miniseries on the Vatican, she accepted an invitation to an audience in Rome with Pope John Paul II.

After two brief, youthful marriages, she settled down with Mr. Justice Allen Linden, who sat on the Federal Court of Canada. The two married in 1984, celebrating their 25th anniversary in 2009. Ms. Anthony Linden adored her husband's three daughters and eventual seven grandchildren.

Although she never had children of her own, she delighted in the company of nephews and nieces. In turn, their glamorous blonde aunt, who drove a white convertible and lived beside actress Jane Fonda, wowed them.

In the 1980s, at the request of the prime minister's wife, Mila Mulroney, Ms. Anthony Linden produced a "Match of Champions" hockey game, pitting the Edmonton Oilers against the Montreal Canadiens, as well as a star-filled television gala with Celine Dion, David Foster and Christopher Plummer. The events raised $2-million for cystic fibrosis.

Bonnie Brownlee, then working as an executive assistant to the Mulroneys, recalls meeting Ms. Anthony Linden for the first time: "People were drawn to her instantly. She had such elegance and grace."

The two women became friends and continued working together on the production of a command performance for Queen Elizabeth at Ottawa's Museum of Civilization during her visit for Canada's 125th birthday celebrations in 1992.

During the performance, one of the dancers had a heart attack and Ms. Anthony Linden rushed to the hospital with the dancer, worried about his inability to speak French and communicate with doctors. Not realizing that her concern for the dancer's well-being had meant keeping the Queen waiting, she hurried back to the museum. The Queen congratulated her on the wonderful show she had produced.

Ms. Brownlee said: "Whether you were the Queen or Barbra Streisand, Marge was comfortable with you. She knew exactly how to handle people. She'd say to me, 'You know people just like them in everyday life. These ones just happen to be famous. Treat them with the same respect as you would anyone else and you'll get along just fine.'"

"She just wanted everything to be right with all people," Mr. Linden said.

Mila Mulroney told The Globe and Mail in an e-mail interview: "Marge was my friend. … a kind, decent and creative soul, who, along with her husband Allen, brought Brian and me many happy moments. We laughed together, we settled all the world's problems. Most of all we enjoyed each other's company. … We have lost a cherished friend. Marge will be missed by all of us who knew and loved her. We will never see the likes of her again."

As much as Ms. Anthony Linden played down celebrity, stargazing was one of her favourite Hollywood activities. Bonnie Brownlee recalls going to restaurants in Los Angeles where her friend would quickly "case the joint."

"She could tell you who was in the room, who they were, what they did and what show they just finished. She was constantly on top of stuff like that." Ms. Brownlee fondly recalls her friend's favourite greeting, "So tell me everything!"

Ms. Anthony Linden retired from CTV in 1990, moving briefly to live in Ottawa before returning to California. In an obituary that appeared in Halifax's Chronicle Herald, her niece, Donna Shewfelt, wrote: "Marjorie Anthony Linden felt that a person who is born by the sea should live by the sea. She spent her retirement years with Allen in her treasured Malibu overlooking the Pacific."

Toward the end of her life, lupus disease, and other health problems, confined Ms. Anthony Linden to a wheelchair, which she loved to decorate with flowers and to be pushed in at high speeds. A glamorous lover of fine clothes, she never wore the same outfit twice, and enjoyed attending social events where she would tease and laugh with everyone.

"I used to say, 'Of course I fell for her.' If she had wanted, she could have had the Pope fall for her," said Mr. Linden. "She charmed everyone."
-Thomas Szlukovenyi, May 3, 2013, The Globe and Mail 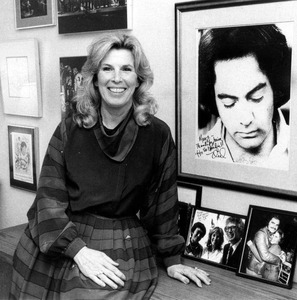