Babs Babineau was born into show-business. Her father and uncles were musicians in the most popular Canadian country band of its day, George Wade and His Cornhuskers. Based in Toronto, the band performed for dances in Ontario and Québec from the mid-1920s until the 1940s and did numerous radio shows. While still in her teens, Babs Babineau became a vocalist with the Eddie Stroud Orchestra, improving her range and versatility. She then joined The Bob-O-Links, one of the best Canadian backing vocal group of the period. The Links eventually toured in the USA with Tommy Dorsey for a year. Babineau acquired a solid reputation among musicians and was sought after by Toronto bandleaders and producers. Upon returning to Toronto, she turned to radio and television, and appeared, throughout the 1950s and 1960s, on many radio and TV shows. She also did a lot of jingles and studio work either as a soloist or back-up singer. Looking back on the fruitful career of his pupil, bandleader Eddie Stroud confided to author Helen McNamara that: “ Babs was a natural. Her tuning, her phrasing were out of this world.”
-Jean-Pierre Sévigny 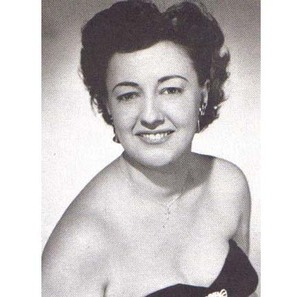