Mardi Noir is the new musical project of Max Villeneuve (Les Psycho Riders) and Nicolas "Nicotine" Bednarz (Les Psycho Riders, Le Nombre, Caféine, etc.). Recorded throughout 2011 and 2012, the band's first album, Le grand réveil, will be available in stores next November 27th via Blow The Fuse Records. The title of the album is a nod to the years of crisis that we are currently going through and, more generally, the turning point of human existence where continuity is particularly shattered and reassessed, just like a brutal hangover.

Each song on the record offers in its own way an introspective journey accentuated by existentialist overtones, characteristic of the band's moods, all the while offering a sound that is both pop and exploratory. Influenced by a dense musical spectrum, which includes the Pixies as well as Teengenerate, Mardi Noir ventures into uncharted territory, characterized by doubt, a longing for new horizons and the search for identity.

The idea behind Mardi Noir was to go a little further and to dig deeper into the true essence of rock. Adulthood, let's be honest, is not just a big party. We had to face the facts: we had to keep exploring, we weren't able to just stop, explains Max Villeneuve. Anyways, we had too many things going on in our heads to just sit down and shut up. Whether it be with rock and more obscure songs such as Promesses de l'ombre and Étrangers or sing-along tunes like Cœurs de ciment, Le grand réveil is an album that surprises and that stands out for its unique composition. 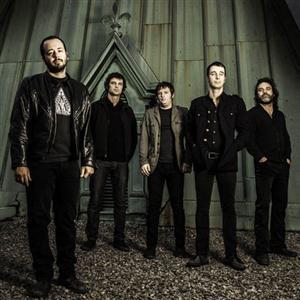