BUDOKAN are a rock and roll band from Victoria, B.C., Canada. They play hook-filled songs with loud guitars that they want people to love and remember. They draw inspiration from all the greats but feel particularly indebted to the likes of Cheap Trick (yes, the band name is a tribute to the Trick classic ‘Live at Budokan’), the Ramones, Redd Kross, the Stones, the Buzzcocks-y’know, the greats.

Andrew Molloy plays guitar, sings and writes most of the songs (knows some chords on the piano as well but can’t make the changes all that quickly). He’s been obsessed with popular music since he bought Elton John’s ‘Caribou’ album for $1 at the age of 11. It was quite a while ago. He’s played in a number of bands over the years, most notably BUM. The band with the really stupid name existed from ’90 to ’95, put out a slew of singles, one full-length epic, a couple mini-albs and a live album and toured Spain twice to throngs of screaming (or at least chanting) fans (seriously). After the breakup of BUM, he formed the Power Failures in Vancouver with Stephen Hamm and Terry Russell (from the amazing Slow and Tankhog). After that ran out of steam, he returned to Victoria and started up Budokan with original drummer John London (Mission of Christ, Pigment Vehicle) and the man to whom we’ll now turn our attention.

Craig Vishek plays guitar, sings and writes some of the songs. He saw both Boston and Kiss with make-up live so there you go. He sharpened his teeth playing in jazzcore West Coast punk band Pigment Vehicle, releasing full-length cds on the Wrong and Sudden Death labels. A tenure with Nomeansno offshoot The Show Business Giants rounded out the guitarist’s love of rock to roll, and everything in between.

Kent Bendall is glamour personified on bass and can write a catchy shuffle when he feels the urge. He did time in Pingu back in the 90’s and is currently also in Victoria new wave geniuses Cablevision.

Newest member Graham Watson hails from the Hub City-Nanaimo, B.C.-and has been banging the hell out of the drums since he left the womb, we suspect. He moved down to Victoria in the early 90’s and joined Andrew and the rest of the BUM group in ’92 just in time to record their ‘Wanna Smash Sensation’ lp for Popllama Records. After departing the group in ’94 he joined Vancouver’s mighty Smugglers and toured the world (Canada, USA, Europe, Japan), recording a number of fine albums along the way. He also kept time in the Metronome Cowboys and the Timber Kings, among others.

The BUDOKAN group released their inaugural 7” single on Magic Teeth Records in 2006. It’s on pink vinyl and is a thing of beauty. In January, 2008 they entered the studio for the first time in a while and emerged with 5 songs. Another session, to complete an album, will occur over the summer and the anticipation is making us wait.
-A. Badge Holder 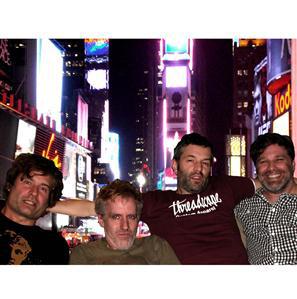