I’ve been playing music my whole life. I picked up the guitar at age 8 and became obsessed with guys like John Lee Hooker and Elmore James. Over the next ten years I spent most of my time looking for music that would speed up my heart rate. Neil Young was the turning point. After I heard Rust Never Sleeps I abandoned what I thought I knew about rock and roll. It opened up my mind to everything else, and I spent any money I had on records.

In high school I formed a band, The Ramble, with my younger brother and my two best friends. We were constantly changing styles of music and instruments from song to song. We started out playing straight rock and roll covers by guys like Eddie Cochran and The Clash. It got really special when we started writing our own stuff. Our first original was called Devil’s Train. Our lead guitarist Thomas Cliplef had written this bizarre melody. I threw a very loud bending harmonica note over top of it, and we felt like we were on our way. I spent 5 years in that band and we made some music I will be proud of the rest of my life.

After The Ramble broke up I wanted something different. I wanted to be able to play anywhere, at anytime, and not have to worry about what other people were doing. I decided to go about it more like Woody Guthrie than Joe Strummer. If other people come in and out that’s great, but it’s not needed. Once in a while I miss playing my loud rock and roll, then I throw on some Mississippi Skeiks and think “oh yeah, this shits cool too.” 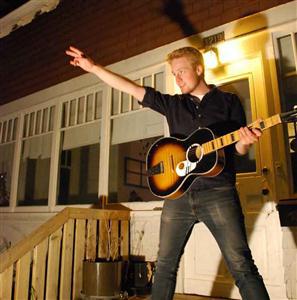