Buffaloswans are a delicious mix of roots, country, folk and 70s psychedelic rock. Made up of exquisitely talented musicians and sound engineers; Scott Bell, James Lamb, Jobi Mihajlovich, James Green, and Stephan Mihajlovich the band creates truly profound listening experiences together. Through their dynamic recordings, serenely mystical lyricism, and powerful stage presence the band continues to elevate their growing audience. Buffaloswans performed on tour at various venues and festivals around Western Canada, and are well known as a shimmering light within the local music scene in Vancouver where they have performed in countless venues, including many CBC events with everyone from Dan Mangan to Two Hours Traffic.

Buffaloswans are touring the release of the record in early November with a tour of Western Canada. The tour culminates in a mind-expanding rendering of the full album in Vancouver on November 10th.

On their first Western Canadian tour in the spring of 2010, the band sold out of their early EP edition, The Sun Hymn, in just twelve days. The full-length album now passes to the hands of those itching to have it in its multidimensional glory.

The Body Electric was recorded live off the floor to 2-inch tape at Afterlife Studios in Vancouver. CBC producer Jon Siddall helped orchestrate this beautiful dance, with engineer John Raham (Frazey Ford, Kinney Star, C.R.Avery) there to capture the sound in all its power and nuance. Mixed at Vancouver's Hive Creative Labs by venerable sound wizard Jesse Gander (The Pack AD, Japandroids), the album has a unique mixture of vintage warmth and the modern size and sheen of a classic from any era.

The release is timely, as the world rallies for new direction in compassion and awareness. Themes of faith, the eternal nature of connection, love and higher consciousness echo throughout the album. Grooving highs, psychedelic departures and quiet moments of solitude depict the scenic vistas and watery realms of the human psyche.

“A 60s style of bluesy, country-rock… a heartening reminder that in a time where our planet might seem to be falling apart, there is a stronger force bringing people together all around us if we’re buoyant enough to notice.” - The Vancouver Examiner

As any artist knows, it is not an easy thing to make the magic in your head form pictures in music. But as a wise poet once said “every relationship is worth at least two poems; one at the beginning, and one at the end.” The album rises and falls with a seasonality, spirituality, and understanding of the cyclical nature of relationships in all their turns and climbs, shadows and dragons and ultimately, their salvation.

Buffaloswans’ impassioned performances, on tape and on stage, will leap into your feet, dance over your listening heart and leave you with magic in your mind for moons to come. 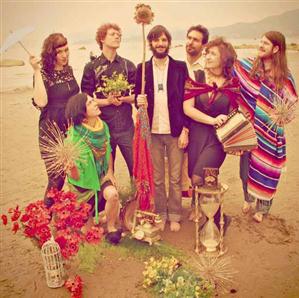