"With a piercing gaze, Petunia looks into the collective soul of the audience, then launches into some high and lonesome vocals that conjure up the ghost of Jimmie Rodgers ... Petunia defies convention and yet there is some conservancy to his music. His honest, cut to the heart songwriting and multi-syllabic narratives would leave a lesser singer tongue-tied and breathless. I know, I’ve tried it. One of the many themes running through Petunia’s lyrics relates to living life on one’s own terms – fearlessly and without regret..."

"...I’ve had the opportunity to tag along on some of his solo tours and can attest that he lives the life he sings about. His curiosity and adventurous nature compels him to check out what’s around the corner and if something offers a challenge or a hair of excitement there’s no holding him back. You can hear this in his music, boldly exploring new sounds and ideas..." - Al Mader, 2011.

Spending the early part of his career playing on every major street corner, subway station and park bench in Canada (and NY city), picking, grinning and singing for his living, Petunia has been a regular on the Canadian touring circuit for many years now. He plays 150 shows/ year all over Canada and has begun touring into the USA, with his band out of Vancouver, "The Vipers".…he has a unique, surreal style all of his own…his live performances have been likened to an Avant-Country night club scene from a David Lynch movie.

Growing up in rural Ste.-Dorothee, Laval, (Quebec) seems like an obvious connection for a sometimes country blue yodeler. Picture shady creeks with fallen tree bridges, and secret hiding spots. Part wanderer, part musician he’s been on the road for full years at a stretch at times…sometimes propelled by nothing more than his outstretched thumb alongside of the trans-canada highway. Maybe you’ve passed him by yourself? He has laid his hat and made his home in many, many spots along the way as befits a wandering troubadour…his traveling libido has led him to secure bands of musicians spanning across three continents. He has played with literally hundreds, and maybe thousands of musicians (personal highlights from recent west coast tours include Phil Alvin, Exene Cervenka, Wanda Jackson). Imagine that David Lynch and Nick Cave had a hillbilly baby. A hillbilly baby that yodeled…or Tom Waits meets Elvis at Woody Guthrie’s hobo junction.

Petunia’s music is infectious, his singing ranges from the most delicate you’ve ever heard to the most powerful, often within a single song…hillbilly-flavoured-swing inflected-ragtime-goodtime-thunderously rolling-one-of-a-kind-you-don’t-want-to-miss-this-sort-of-a-show. He has a huge repertoire of music to draw from but fans continue to cry out for the Petunia originals. He is an undiscovered Canadian treasure that will soon join the pantheon of legendary performers from north of the 49th.

Petunia & the Vipers had a music video come out on Bravo Television of one of Petunia's own originally composed songs entitled, "Cold Heart Breaker" from one of Petunia's older Fredericton, New Brunswick east coast bands, "Petunia & the Loons". That Album was the #1 Independent CD release of the year across Canada on College Radio in the Folk/ Roots/ Blues category for 2007. Also out on television the following year was CBC's "Wild Roses" TV show, on which Petunia performed another song from the same CD, "The Cowboy Waltz", another Petunia original. More recently, Petunia & the Vipers had a song play on the CW TV network in it's prime time TV series "Supernatural".

In (December 2008), Petunia composed all of the songs for, and was the music director for the Caravan Farm Theatre production of "The Secret Sorrow of Hatchet Jack MacPhee". It also won rave reviews.

He has 7 CDs out, including a vinyl LP & 45 r.p.m., with more due this winter. His latest release (also out on vinyl) has been winning rave reviews. Recorded and completed over a 2 year period, at The Sound Factory in Hollywood, CA, recorded by 3-time Grammy winning engineer, mixed by Marc L'Esperance with overdubbing and additional recording at Heavyosonic in Vancouver. Mastered by Bernie Grundman in Hollywood who also recently mastered Tom Waits' latest recording. Produced by Petunia & Phil Sgriccia.

"Impressive stuff – this may well be the Vancouver roots music release of the year"
Al MacInnis – The Georgia Straight, Vancouver, BC, (Nov. 2011) 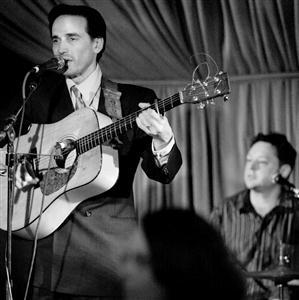