So when their effort “Into The Elephant” was posted online for free streaming, alongside the 103 other albums submitted to local arts and entertainment magazine The Scope’s community music venture, the then nameless band didn’t think they’d be getting an invite to play an in-store gig at Fred’s Records, or that their debut no-budget project would be nominated for three MusicNL awards.

But those things happened, and more.

A year ago most in the band were attending high school (the remaining two will graduate from Holy Heart this year) and hadn’t yet had the opportunity to absorb themselves in the city’s music community.

Still, with Finkel and Warner’s dynamic harmonies, the band’s compelling and unadulterated group vocals, and an overall simple yet spirited acoustic feel, they managed to pull together a winning formula with their nine songs.

And with that, East of Empire began to attract ears and build a local following.

Graham and Finkel have known each other all their lives and have been playing together for four years, says Graham, the band’s soft-spoken rhythm guitarist. Finkel, Sing, Graham and I, along with drummer Tim Cuff, are seated around a table at a downtown café and it’s their first time doing this kind of in-person group interview with the press.

“I got a guitar from my mom’s friend and, once I met Jonah, he inspired me to teach myself how to play,” Graham said. “So Reuben would play bass and I’d play guitar and ... after a while Jonah moved in from Corner Brook and we started making songs together.”
By February of last year Warner and Sing had joined the group, which had compiled a handful of songs they decided to record in Emke’s living room with minimal gear and makeshift Red Green-style duct-taped microphone stands.

“There were three months we didn’t really do much but sit around and write,” recalls Finkel, who also plays bass. “We did RPM and that was really cool because we didn’t have any ideas of where it was gonna go.”

“It kind of just evolved,” adds Sing, who handles fiddling duties. “We just jammed together — we just enjoyed playing together and writing music. Then we decided to try and get a gig downtown.”

Following the group’s debut gig at Chapters book store, at which Cuff first saw the drummerless entourage he was about to join, Fred’s owner Tony Ploughman invited East of Empire to play in his store.

“We started playing and there was no one really there,” recalls Graham. “And then about three or four songs in the whole room was packed. It was great.”

Toward summer’s end they performed at Eastern Edge Gallery’s 24 Hour Art Marathon, where they elicited the fanfare of local music promoter and former Wintersleep bassist Jud Haynes, who then sprung an opportunity on them the members cite as their most exciting moment as a band.

“He said Timber Timbre’s coming, (and) we’ll get you guys to open up,” Graham said. “And I think we all just about dropped to the floor. It was crazy. That was the most nervous I’ve ever been for a show. That was the first real show where everyone’s sitting down and all their attention is fully vested in you. And it was a little scary.”

A live recording of the show, which was held Oct. 22 at Cochrane Street United Church, is now available as a pay-what-you-can download on the group’s bandcamp page.

“I don’t know what it was really that made the album take off,” he continues. “I think I might attribute it to Jonah’s crazy guitar lines that we all played off of.”

“We took RPM as a real challenge to really make an album that we knew we could do,” Finkel said.
Over the holidays the band booked a show at LSPU Hall, an all-ages-friendly venue, and nearly packed the 170 seat venue. They also raised a chunk of money to put toward their follow-up effort, which they hope to have recorded by the end of spring.
“We want to get something out by the summer because we really want to play at least some other spots in Newfoundland, and Halifax,” Graham said.

“Maybe folk fest,” Sing chirps in. “I would love to play folk fest.”

“A goal is to have a really solid fan base in St. John’s, at least by this new album,” Finkel said. “To have a concrete fan base that we can rely on, not just from bar shows. Hopefully a new album can make that happen ... so we can book shows where we can actually have a full house and move on to Halifax.”

Among their influences are Arcade Fire, Andrew Bird, Bon Iver and Hey Rosetta!, so when Rosetta keyboardist and St. John’s native Romesh Thavanathan expressed interest in producing the band’s next album, they were ecstatic.

“We don’t really even know him but he’s Romesh from Hey Rosetta, so that’s pretty cool,” says Graham.

Though the collaboration is not confirmed, due to Hey Rosetta!’s busy tour schedule, East of Empire and their potential to be Newfoundland’s next big band will likely have no trouble generating the interest of producers and studio folk.

If it happens that they can’t collaborate with Thavanathan, Finkel says the band would also love to work with local musician Mark Bragg.
A lot remains to be seen for this young band, but for the moment they’re taking a break from performing and focusing on their creative output by writing songs. Stay tuned though — we’ll be hearing from them again real soon.
-Justin Brake, The Telegram.com 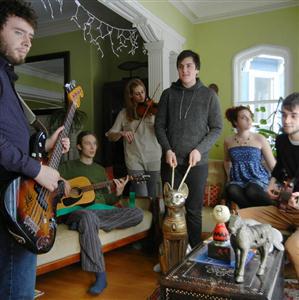